The percentage of women on company boards across the Russell 3000 list has increased from 16% in 2017 to a record 22.6% this year. But there is a long way to go before boardrooms have equal gender representation.

That’s the goal of Women on Boards, a nonprofit aiming to have women sit in half of public company board seats.

The Seattle chapter held a panel discussion last month about increasing gender diversity in boardrooms and what questions women should ask as they explore potential board participation.

“Different stakeholders all have different viewpoints,” added Wright, a board member at Amperity, Even, Fastly, and Lucid. “And these diverse perspectives should be represented in the boardroom.”

Boardroom diversity is necessary if companies want to fully serve customers now and in the future, said Jessie Woolley-Wilson, CEO of DreamBox Learning and a former Rosetta Stone board member.

“The world is changing. The representation of people of color, and women, and LGBTQ — everything is changing,” she said. “The best leaders and the best companies are going to be those that have a deep understanding of the customer, and can deliver empathetic services and products.” 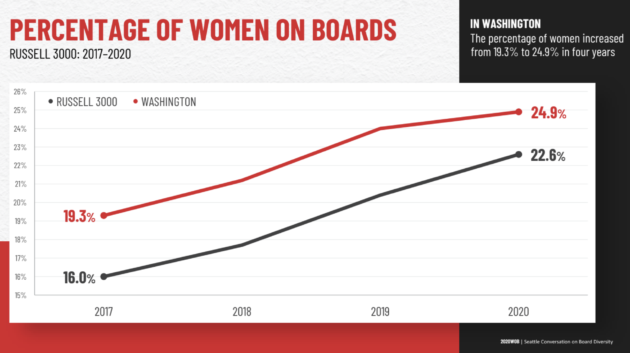 Recent government mandates are helping close the gender gap. California passed a bill in 2018 requiring a minimum number of women directors for publicly-traded firms, and added more diversity requirements earlier this year. Last month German lawmakers approved a law requiring public companies to have a certain number of women on the board. And this week Nasdaq submitted a new proposal requiring listed companies to have at least two diverse directors, including one self-identifying woman and one self-identifying underrepresented minority or LGBTQ+.

Washington state lawmakers passed a bill in March requiring corporations to have at least 25% of boards made up of “individuals who self-identify as women” by January 2022. Currently, about half of the 50 Washington companies on the Russell 3000 would not meet that standard. And just five — Amazon, TrueBlue, Nordstrom, Neoleukin Therapeutics, and Avalara — have gender-balanced boards.

“We can do better,” said Joanna Lohkamp, managing director at WMP Capital who co-chaired the Seattle event. “We must do better in gender and racial diversity.”

Company boards are historically known to include former CEOs, CFOs, and current investors. But a desire for people with ongoing operational experience and other knowledge is opening up the requirements for board participation, said Jocelyn Mangan, CEO of Him For Her and a board member at Papa John’s and ChowNow.

“Companies want people who are seeing things today in real time,” she said.

Underrepresentation of women in leadership is also often cited as a driving factor behind the broader tech industry’s gender balance issues. The theory is that if more women sat on corporate boards and wrote the checks, then more women would feel comfortable entering male-dominated fields and more female entrepreneurs would get funded.