Dorothy Li, a 23-year Amazon vet who helped launch game-changing innovations such as Prime to Kindle, is the latest experienced executive to join Convoy’s leadership team.

Convoy is one of a handful of privately-held companies in the Seattle region valued at more than $1 billion, raising $400 million at a $2.7 billion valuation in November 2019.

The startup — backed by the likes of Bill Gates, Jeff Bezos, Marc Benioff and others — has bulked up its C-suite over the past few years. Last August the company hired former Expedia CEO Mark Okerstrom as president and COO. Other leaders came from companies such as Hulu, Airbnb, and Amazon, where Convoy co-founders Dan Lewis and Grant Goodale worked before launching Convoy in 2015.

Goodale was previously CTO; he will transition to a new role overseeing the company’s carrier marketplace.

Li said she was drawn to Convoy for a variety of reasons, but partly because it reminded her of Amazon in the early 2000s, just as the company was about to turn into a behemoth.

“Convoy feels very much like it’s at an inflection point,” Li told GeekWire this week. She most recently was vice president of BI and Analytics at Amazon Web Services, and previously spent time at Oracle.

Lewis said Convoy’s business is “stronger than ever,” with year-over-year revenue growth in the triple digits. Its network now has more than 67,000 carriers and 300,000 trucks. Shipping customers include Anheuser-Busch, P&G, Niagara, and Unilever. 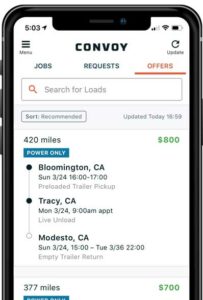 Convoy was able to weather the pandemic-driven volatility that rocked the U.S. trucking industry. There are ongoing global container shipping delays, but Lewis said it hasn’t impacted Convoy as the company’s business isn’t reliant on how containers come in and out of ports.

Then there is the trucking industry labor shortage, though some question whether it is an actual shortage or just a retention problem. Regardless, Lewis said a lack of drivers doesn’t have a material impact on Convoy because it targets smaller carriers, or the “long tail of trucking companies” that are “actually really available and active.”

Craig Fuller, CEO of trucking data and news hub FreightWaves, spoke on a Bloomberg podcast this week and said there were 11,000 new trucking companies that entered the industry within the past month — a trend that could bode well for Convoy’s strategy.

Convoy also faces competition in the $800 billion U.S. freight industry from a flurry of digital freight startups that are also raising gobs of venture capital, and traditional brokers such as C.H. Robinson. Lewis said he hasn’t seen many newer entrants “actually moving the freight themselves.”

Direct competitors include Uber Freight — which reported $301 million in revenue for the March quarter, up 51% — Transfix, and Sennder, which raised $80 million this month but operates in Europe.

Convoy has rolled out various new features and services over the past year, including an expansion of its “drop-and-hook” program Convoy Go.

Lewis declined to say if another funding round or IPO plans are in the works. “There will be opportunities for us to take the company to the next level, from a financing and liquidity perspective in the future, but there’s nothing imminent,” he said.

Goodale’s new role will include spending more time with truck drivers and “advocating” for them on a local and national level,” Lewis said.

“There are a lot of industries that wish they would have done that earlier,” he added. “Transportation, delivery, housing companies — they didn’t really have somebody to advocate on behalf of the people doing all this work, to figure out how to make their experience better and set them up for success in the country. So I think we’re going to get ahead of that.”

Convoy employs around 1,000 people and plans to hire throughout the year. Li said she hopes her new role at Convoy helps elevate other diverse leaders.

“There are not that many female technology leaders that are visible,” she said. “One of my goals is to bring more of that inclusion and diversity into Convoy and for the greater Seattle area as well.”

Flexport, another billion-dollar digital freight company, also has a CTO who came from Amazon: James Chen, who was previously director of technology for Amazon Shipping and joined Flexport in 2019. He is based in Seattle.