What’s with all the Pittsburgh stories? Read our GeekWire HQ2 FAQ for more info.

Six hardware startups pitched their ideas to local investors at the Mid-Atlantic Regional competition at Google’s Pittsburgh office, where companies showed off everything from robotic work carts to pain relief products for pregnant women.

Three of the companies were based in Pittsburgh, long home to a robust robotics scene dating back several decades — hence the nickname “Roboburgh.” One of them, Velocity Robotics, won the $3,000 first place prize and a chance to win a $50,000 grand prize at the Hardware Cup International Finals in April hosted by AlphaLab Gear, a Pittsburgh-based hardware accelerator that created this competition three years ago and has grown it around the globe. 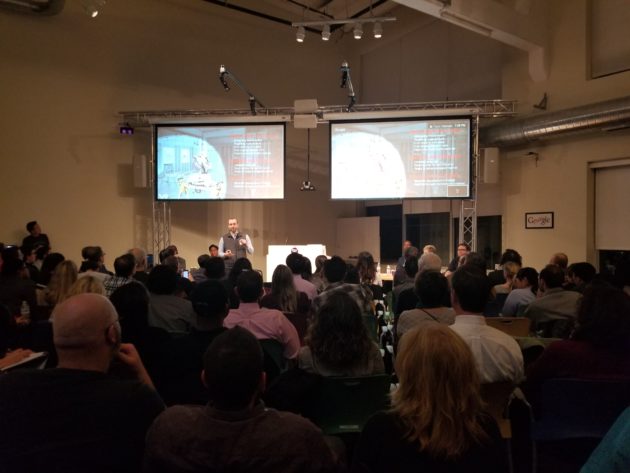 Brad Kriel founded Velocity Robotics two years ago after his experience as a home remodeler. The company’s flagship product is AutoSet, a smart attachment for a miter saw that automatically makes cuts based on data from an accompanying app and Bluetooth tape measure. The idea is to use robotic technology to increase precision and remove the need to manually measure, mark, and eventually drop a blade.

“I’ve wanted to start a company my entire life,” Kriel said after winning the first place prize. “I just went out and started asking questions about the biggest pain points and bottlenecks.”

During his 4-minute pitch, Kriel explained how carpenters waste money and time when making mistakes with the miter saw. The $499 AutoSet device “pays for itself in a matter of weeks,” he said.

“AutoSet enables our users to measure and cut both faster and more accurately,” Kriel added.

Kriel is the only full-time employee at Velocity Robotics and is looking for investment. The company is targeting the residential remodeling market but wants to eventually license its technology to major tool brands.

“We were very intrigued with the market opportunity they were going after, how they were positioned, the current maturity of both the technology and product, and the strength of the team,” said David Motley, a judge and co-founder of Pittsburgh-based BlueTree Venture Fund.

Motley told GeekWire that while a $3,000 prize may not make or break a company’s success, events like the Hardware Cup are important for Pittsburgh’s overall tech scene that already includes groups like the Pittsburgh Robotics Network and National Robotics Engineering Center. Tuesday’s event also featured speakers from companies like Bosch and Philips, both of which have engineering offices in the city.

“It serves as a watering hole to bring together a lot of the stakeholders who are in this ecosystem we are creating in Pittsburgh around entrepreneurship and innovation,” he said.

AlphaLab Gear saw the number of applications double this year for the Mid-Atlantic regional competition. It created the event in part to fill a gap for startups that may have raised a seed round but need help getting to the next level.

“Being in a hub for hardware and robotics here in Pittsburgh, it makes a lot of sense for the competition to be based here,” said Leah Simoncelli, coordinator for the Hardware Cup.

AlphaLab Gear also noticed the misconception that “hardware is hard.”

“With dropping costs of sensors and more access to tools, it’s more reasonable to start a hardware startup and people don’t necessarily know that,” Simoncelli said.

CBInsights noted last year that “consumer hardware startups continue merging at a fast clip” while investment in the second quarter of 2017 reached $1.2 billion.

Hardware Cup will host four other regional U.S. pitch competitions in the coming months, in addition to international pitch days that lead up to the grand finale in Pittsburgh, this year held in conjunction with the IEEE N3XT event.

“Hopefully this turns into something where hardware is understood as the future and as a great investment,” Simoncelli said.

The two other Pittsburgh-based companies that competed on Tuesday were EXG Wearable Devices, a startup that develops earbuds which control smart devices with eye gestures. Its executives have roots from Carnegie Mellon University and the University of Pittsburgh. Another was Spand-Ice, maker of pain relief products for mothers founded by long-time Pittsburgher Helen Behn.