Stanford, Berkeley, and MIT continue to pump out more entrepreneurs than any other universities across the U.S.

Seattle-based investment database site PitchBook on Friday released its annual report on the schools producing the most venture capital-backed entrepreneurs. It’s another reminder of the startup mecca that is Silicon Valley.

Bay Area schools topped the list again. Stanford led the way with 1,178 entrepreneurs who have raised a collective $28.8 billion over the past decade. University of California Berkeley was second, followed by MIT, Harvard, and University of Pennsylvania — the same order as last year’s ranking. 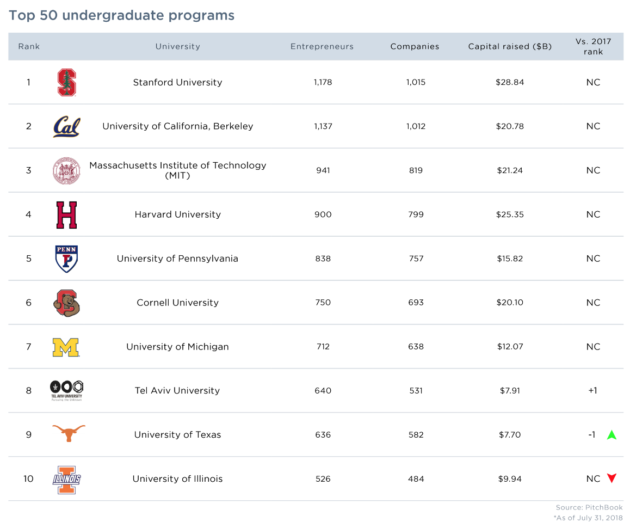 The University of Washington ranked No. 22, up one spot from last year’s rankings.

The UW and its innovation arm, CoMotion, are a key part of the booming tech industry in Seattle. Given its huge enrollment compared to other universities on the PitchBook list — more than 46,000 last year — one might expect the UW to rank near schools such as Stanford or Harvard. But its ranking reflects key startup ecosystem differences between Silicon Valley and Seattle, both in total entrepreneurs and total venture capital raised.

The UW may not produce as many entrepreneurs compared to other schools, but it has ranked among the top 10 on Reuters’ list of the world’s most innovative universities for the past several years. It also boasts one of the top computer science schools worldwide.

In its report, PitchBook wrote that “tapping networks remains perhaps the most trusted recourse to finding not only the right people with whom to launch a new venture, but also the right providers of needed capital.”

“And thanks to demographics, biases and more, the people you went to university or graduate programs with remain a key component in your network,” the report continued. “The evidence of the power of such networks is clear in the following pages, as we rank multiple university programs by their production of entrepreneurs that have gone on to raise a round of venture funding.”

Some point to those networks as the cause for lack of diversity within venture capital and the tech industry in general. A recent study found that 40 percent of VCs went to either Harvard or Stanford.

From the study, compiled by Silicon Valley investor Richard Kerby:

This insularity of the venture ecosystem has ripple effects throughout the tech industry. It is not a coincidence that the amount of capital raised by minorities and women closely resembles their representation among venture capitalists. And furthermore, it is no surprise as to why the demographics of most venture-backed startups also reflects the demographics of the venture capitalists that fund these companies. If we want to have more successes in the venture and broader tech ecosystems, diversity in all fashions (racial, gender, cognitive) needs to be a part of what drives us forward.