There’s been a lot of talk about self-driving trucks and how autonomous technology will impact the freight industry, even before potential changes to consumer vehicles. This topic certainly came up during our interview with Convoy, the Seattle startup that just raised a big $62 million investment round to fuel growth of its on-demand technology-fueled network which matches truck drivers with available jobs.

But when asked about how much of the company’s new investment is a result of the potential for self-driving trucks, Convoy’s co-founders cautioned that we’re still a long ways away from trucks that drive themselves and the impact autonomous technology will have on truck drivers’ livelihood.

“There’s a hell of a lot of economic incentive to make this work for trucks,” said Convoy co-founder and CTO Grant Goodale. “There are just a lot of hurdles to get over.”

Convoy’s smartphone-based, Uber-like system lets truckers find jobs in a matter of minutes without the traditional legwork and monetary cut required when using a broker. The idea is to reduce costs for shippers and maximize utilization of truck drivers. Convoy sources work directly with a customer like Unilever and acts as a full-on trucking service to move their freight from start to finish, using automation wherever possible.

Clearly, taking human drivers out of the equation would impact Convoy’s business. It’s why companies like Uber, which competes directly with Convoy via its Uber Freight service, are developing their own self-driving trucks. There are other startups doing the same.

But for now Convoy sees a more pressing and potentially larger opportunity to focus on improving the cost structure and reducing waste with today’s trucking industry.

“You’ll actually have better performance and lower price changes over the next 5-to-10 years from reducing overhead and optimizing the network than you will from self-driving trucks,” said Convoy CEO and co-founder Dan Lewis.

Goodale noted that there’s “a lot of economic incentive to automate freight before consumer vehicles.” But he said Convoy isn’t banking on self-driving technology to arrive any time soon.

“It’s certainly not the case that all the other pieces are in place and we just need the [self-driving] technology to cross the finish line before we can launch this,” said Goodale. “It’s a decade or more before this is going to be real, at scale.” 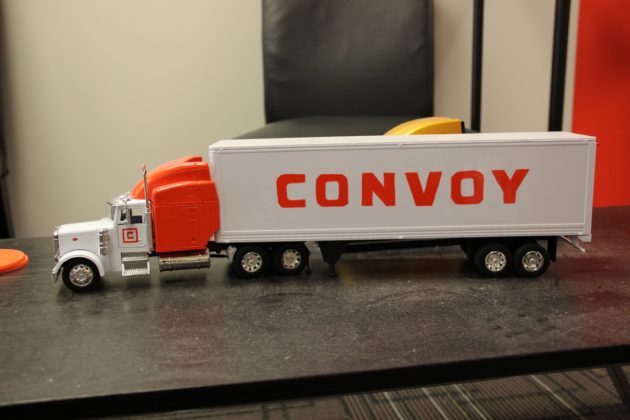 Even if the technology is ready, Lewis noted how there are so many regulations, contracts, and other intricacies with the trucking industry that will require human interaction. For example, drivers would still be needed to secure the back of trucks; make sure pallets are packed correctly; sign papers at warehouses; and more.

“Drivers will still be in the truck for a long time doing all these things,” Lewis said. “Until that’s different, the cost structure doesn’t change. You’re still paying a person to be in the truck.”

There’s a hell of a lot of economic incentive to make this work for trucks. There are just a lot of hurdles to get over.

There are also state regulations that limit the number of hours a truck can drive. If that changes after self-driving technology is implemented, then Lewis does see potential economic changes as companies will be able to get more utilization of the same asset.

But even so, different states have their own regulations, and for trucks going across the country, it could be complicated.

There will also be issues for early adopters of self-driving trucks. Lewis explained that even if a truck can drive 22 hours a day, how will it find enough work? How will it integrate with shippers who are used to working with traditional trucks, and what are the most cost effective rates? What rubric will be used to determine pricing, given that existing algorithms are based on 11 hours of driving per day?

But when and if this technology comes to the mainstream, Convoy seems poised for potential changes. Lewis said the company’s optimization platform could incorporate self-driving and non-self-driving trucks into one service.

“Whoever can build the network that shippers are using and trucking companies are buying into that builds trust on both sides — that is the place where you will want to insert self-driving technology in the future,” he noted.

GeekWire spoke to several truck drivers this week at the TA Seattle East truck stop in North Bend, Wash. to get their thoughts on self-driving technology. Most were wary about not having human drivers in control of an 80,000-pound moving machine.

“It’s just going to be a weird thing, because you are not in control of your vehicle and the vehicle takes control by itself,” said James Gutierrez, a truck driver from Amarillo, Texas who was moving a load of dry food to Sumner, Wash. “I am pretty sure a lot of things are going to change, but hopefully by that time I am retired in the Bahamas somewhere kicking back with my wife.”

Chris Richardson, who has been driving trucks for nearly two decades, said he’s worried about self-driving trucks malfunctioning on the road.

“I understand they want to basically be able to run freight cheaper so they can get rid of us as the driver, and all they have to do is push a couple buttons,” he explained. “But when that things goes kaput, there are going to be dead people. I don’t want to be anywhere near a computerized truck. I would be scared to death.”