It’s a warm summer afternoon at the TA Seattle East truck stop in North Bend, Wash., and Jerry Brooks is waiting for business. The 60-year-old driver from South Carolina wants to head back east, but the offers he’s received so far don’t meet his standards for distance and pay.

“Everybody you see here is looking for loads,” says Brooks, a 38-year truck driving veteran, sitting in his trailer and pointing out to the other trucks. “They are sitting here and they wait. Ain’t nothin’ guaranteed. Flip a coin.”

Now a Seattle startup, which just raised cash from Bill Gates and other tech luminaries, is looking to make life easier for drivers like Brooks and shippers like Unilever and Anheuser-Busch.

Convoy today announced a massive $62 million funding round led by Y Combinator’s Continuity Fund, the investment arm of Silicon Valley-based accelerator Y Combinator. Also participating in the Series B round is Cascade Investment, the private investment vehicle of Gates, Mosaic Ventures and Expedia Chairman Barry Diller. Gates, the Microsoft co-founder, has other related investments in industries like railroad and agricultural.

The fresh cash will help Convoy expand across the U.S. and build the infrastructure required for its on-demand technology-fueled network that matches trucking companies with shippers that need to move freight.

The U.S. trucking industry, which exceeded $700 billion in 2015 with freight volume expected to grow another 3 percent in 2017, has traditionally used brokers to help facilitate transactions between trucking companies and shippers.

But that process, from finding to matching to pricing jobs, is often done manually. Convoy is bringing automation to that workflow, with the end goal of reducing costs for shippers and maximizing utilization of truck drivers. Its smartphone-based, Uber-like system lets truckers find jobs in a matter of minutes without the traditional legwork and monetary cut required when using a broker.

“We don’t think there are any other companies that have taken the same approach,” said Convoy CEO Dan Lewis.

GeekWire met with Lewis and his co-founder Grant Goodale this week at the company’s bustling downtown Seattle office that houses 120 employees; its workforce has doubled in eight months and could reach 200 by the end of this year.

Goodale noted that Convoy is not simply augmenting an existing process with technology like some of its competitors; instead, Convoy sees technology as the backbone of the process itself.

“We want to build cars, not faster horses,” Goodale said.

Convoy initially worked with smaller shippers doing short routes on the west coast. But it has since inked deals with Fortune 500 companies like Unilever and is now fulfilling loads on longer routes across the U.S. with more than 300 shippers. The startup, which makes money by keeping a percentage of each transaction, has 10,000 trucking carriers on its platform that typically carry 5-to-10 trucks per company.

Lewis compared Convoy to Amazon, the Seattle tech giant where he and Goodale previously worked. He was fascinated with how Amazon invested in warehouses to help optimize their supply chain and ultimately change consumer shopping behavior by offering fast shipping at a low cost.

Lewis, who estimates that there are 15,000 freight brokers in the U.S., said Convoy is doing something similar.

“We are investing in infrastructure to change service levels and to change cost structures,” he said.

Convoy, which won Startup of the Year at the 2017 GeekWire Awards, is also collecting hoards of data around how shipments are moved from point to point and can provide customers with insights that improve efficiency — for example, the optimal times for drop-off and pick-up, or the most effective ways to operate a warehouse. 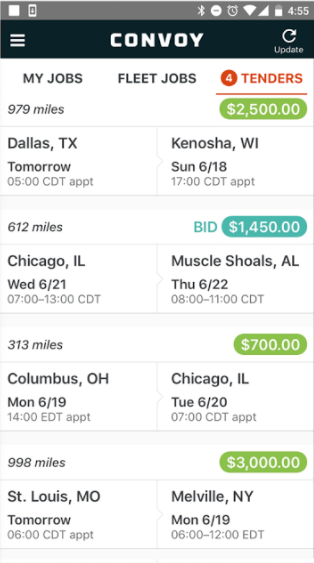 Part of the reason Convoy raised such a large Series B round is to help drive adoption of its platform. That effort includes not only getting Convoy in front of truck drivers, but helping them understand the value of going from manual to digital.

“Once you get the drivers signed up, then we really start to address the economics of the business,” Lewis said. “But that takes time.”

When GeekWire spoke with drivers at the TA Seattle East truck stop this week, only one had heard of Convoy. After explaining how the platform works, some were wary that it could help.

“I think they’re relying too much on computers,” said Brian Larocque, a new driver based out of Connecticut.

Others said they’d be interested in trying it out. Glenn Sorrells, an 19-year truck driving veteran from Tulsa, Okla., said he already uses apps like Truckloads to find work.

“It makes it a lot easier,” he noted.

But Convoy is trying to do much more than something like Truckloads, which operates a Craigslist-like marketplace that trucking brokers use to post job opportunities. Convoy sources work directly with a customer like Unilever and acts as a full-on trucking service to move their freight from start to finish, Lewis explained, using automation wherever possible.

Speaking of automation, Convoy is closely watching the development of self-driving trucks. But for now it sees a huge opportunity to focus on improving the cost structure and reducing waste with today’s trucking industry. The company isn’t banking on self-driving technology to arrive any time soon, though it seems poised for potential changes.

“Whoever can build the network that shippers are using and trucking companies are buying into that builds trust on both sides — that is the place where you will want to insert self-driving technology in the future,” Lewis noted.

People tend to get excited when they realize that what we’re trying to do isn’t incremental, but transformative.

Convoy’s investors seem to be betting on the company becoming a go-to platform for the industry. But Lewis noted that for many of the company’s backers, including Gates and Cascade Investment, their support goes beyond making a return.

“This will clearly make things better for truck drivers,” Lewis said. “That was one of the things that got [Gates and Cascade Investment] excited about this beyond financial possibilities.”

Added Goodale: “People tend to get excited when they realize that what we’re trying to do isn’t incremental, but transformative. We’re not trying to shave a percent here or there — we really want to change the entire cost structure of the industry.”

The $62 million investment is one of the largest for Seattle-area startups this year; others include Rover’s $65 million round and Smartsheet’s $52 million round.

As a result of the funding, Anu Hariharan and Ali Rowghani, partners in the YC Continuity Fund, will join Convoy’s board. The fund’s primary goal is to support the accelerator’s alumni companies, though Convoy never went through Y Combinator.

“By improving trucking, Convoy is improving the foundation of our economy,” Hariharan said in a statement. “This service allows shippers to transform their supply chains at the same time that it allows carriers to grow their businesses more quickly, on their own terms. In 10 years, we’ll be astonished that this was ever done another way.”

Truck driver Marc Sanderson certainly has seen a lot of change on the road in his 33 years of hauling loads across the country. And while he liked the Convoy concept, he said he wasn’t quite ready to make a change this late in his career, even though traditional freight brokers command as much as 25 percent of the price of the job.

“I am still putting a good chunk of money in my pocket, too, you know,” said Sanderson, who hails from Tampa, Florida, and was driving a load of military supplies to the Seattle area with his wife Sandra by his side. “Like I said, I would rather have [the brokers] go through all of the headaches than me. It’s bad enough what we are dealing with out here on the roads than to be worrying about that.”

But Sanderson, whose wife handles communications with dispatchers, load coordination, and other tasks, said if he was younger he might give something like Convoy a try.

“If I was going to stay in a little bit longer, maybe I’d try it, but I have had enough behind the wheel,” said Sanderson. “Like I said, it ain’t like it used to be.”