A new Seattle startup backed by top venture capital investors and NFL stars is looking to change the way sports fans pay for jerseys with an e-commerce rental model that proved successful for tech companies like Netflix and Gamefly.

Led by CEO Brian Watkins, a long-time Seattle entrepreneur with leadership experience at places like Nordstrom, Ritani, Blue Nile, and Wetpaint, the new startup offers a sports jersey rental service that charges customers $19.95 per month ($16.95 for youth sizes) in exchange for selected jerseys that show up at your doorstep. When a fan wants something else, they simply send back their jersey and receive another a few days later. Rep The Squad handles the sourcing, shipping, and cleaning of jerseys from its warehouse in Seattle.

The idea is to give sports fans flexibility when it comes to repping their favorite team or player. High-quality authentic jerseys can cost upwards of $200 — a hefty investment that can feel especially painful when a player is traded to a new team, or when your child grows out of his or her size within months.

This is Saggy Timmy. His parents buy jerseys two sizes too big so they’ll last longer. He’s not thrilled.

Rep The Squad follows the model Netflix used in its early days, charging a monthly subscription fee that allowed customers to rent DVDs shipped to their home. Applying that strategy to jerseys, though, is certainly a unique idea in a sports industry where other fan apparel companies like Fanatics are also prioritizing technology and attracting investor attention.

Rep The Squad is a spinout of Madrona Venture Labs, a “startup studio” Madrona Venture Group created in 2014 that lets the firm rapidly test new ideas before hiring a CEO to take it to the next level.

Watkins, who spent eight years at online diamond retailer Blue Nile and founded high-end online jewelry brand Ritani in 2011, told GeekWire that he initially thought the business model for Rep The Squad wouldn’t work. But days and weeks of research and testing helped change his mind.

“We learned some pretty significant things,” he noted. 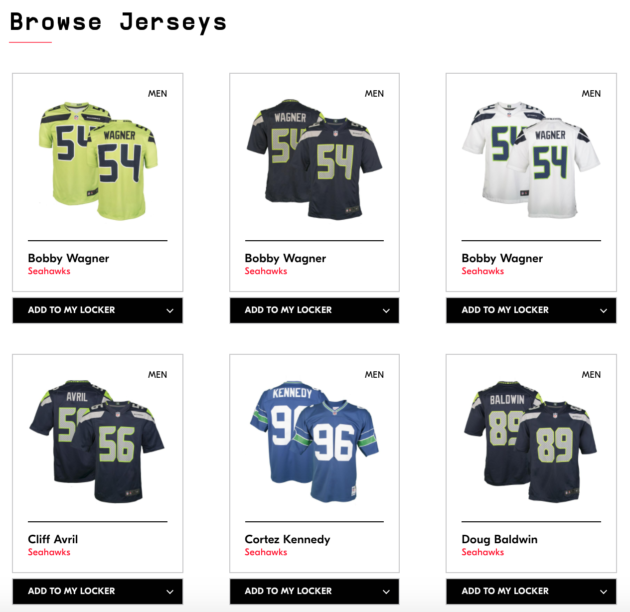 One key takeaway from the due diligence was that the service would not only appeal to fair-weather fans who wear jerseys sparingly, but perhaps even more so to the most passionate fans.

He noted that the model presents a unique way for hardcore fans to wear jerseys of not only different players each week, but different colorways and limited edition versions. 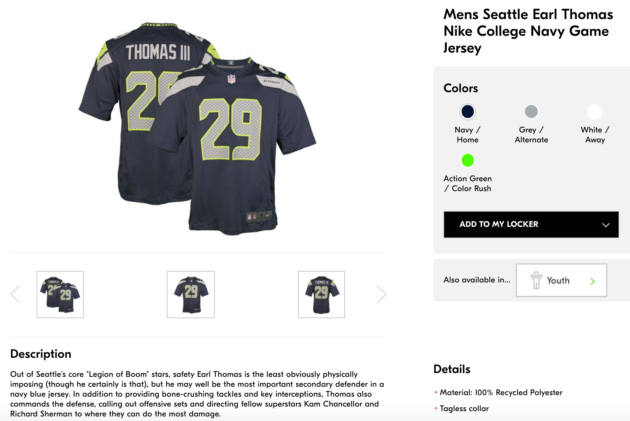 Rep The Squad is also betting on a recent trend, particularly with millennials, of consumers prioritizing access over ownership, whether that’s using Uber over buying a personal car, paying a monthly Netflix fee to stream video content, or renting high-end clothing with a company like Rent the Runway or Le Tote. It also follows a sharing economy model that is driven by new technology allowing for peer-to-peer usage of a car, home, or other physical assets.

Watkins, who co-founded the company with former Ritani colleague Alex Berg, said that being able to rent whatever jersey you want for any given occasion can be more rewarding than showing off a closet full of jerseys.

“It’s a lot more about expression,” he noted.

The company purchases jerseys from a variety of different sources, Watkins said, but most of the “regular” jerseys are made by Nike. There are also “throwback” jerseys offered, as well as those with alternate color schemes or special ones like “Salute to Service,” which feature military-related designs. Customers are able to purchase and own jerseys after trying them out.

Rep The Squad is starting with NFL jerseys in three markets: Seattle, San Francisco, and Detroit. It will expand to more teams and cities over time; the company also plans to offer jerseys for other leagues, including the NBA, which will launch this fall. Watkins said the startup could expand its site to include a used jersey store and even offer products beyond just jerseys.

Watkins also said it was important to get support from athletes and in particular Sherman, who “lit up” when he first heard about the idea. The Seahawks star often does a jersey swap with an opposing player after games and has amassed quite the collection. 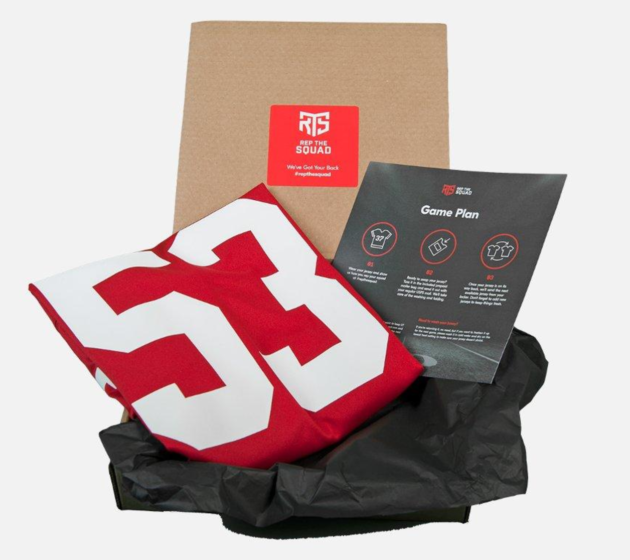 “Rep The Squad is truly unique and the concept immediately resonated with me,” Sherman said in a statement. “As players, we also like wearing different jerseys from various sports when we’re off the field. That’s the flexibility Rep The Squad brings to the table.”

Added Watkins, on Sherman: “He thinks of jerseys almost like what we used to think of trading cards, but they are so much more emotionally significant. It’s about having respect and putting a player’s jersey on and really showcasing them and honoring them.”

Okung, a former Seahawks offensive lineman who is also a startup founder and active investor, told GeekWire that “buying a jersey from your favorite team is an incredible experience.”

“Rep The Squad offers an environment where customers can have multiple options in jersey selection for a better price,” he added. “Why purchase one jersey when you can have many?”

Having that endorsement from professional athletes is important for Rep The Squad and will help the company tell its story. Watkins said one of company’s biggest challenges is not so much operational logistics or cleaning jerseys, but rather to “land the brand.”

Rep The Squad offers an environment where customers can have multiple options in jersey selection for a better price. Why purchase one jersey when you can have many?

“Fans are really fickle,” he explained. “If you’re not a true provider or brand that speaks the language of fandom, I think people sniff it out.”

Technology is a key part of the company’s business, whether it’s using algorithms to figure out what jerseys fans in a particular city are demanding, or placing RFID chips in jerseys to track products and use geofencing for unique events — a feature that could come in the future, Watkins said.

Watkins is unaware of direct competitors. A company called JerseySquare launched an Indiegogo campaign 2012 for a similar idea but it wasn’t funded.

Rep The Squad has 10 employees and plans to raise more money in the coming months. Watkins called out the support of specific investors like Madrona’s Len Jordan, who will join the board; Maveron co-founder Dan Levitan, a huge Duke basketball fanatic and backer of several successful consumer product companies; and Theresia Gouw, co-founder of Aspect Ventures and investor in companies like BirchBox and ModCloth. An investment fund associated with the owners and executives of the San Francisco 49ers are also official partners of Rep The Squad.

Mike Fridgen, CEO of Madrona Venture Labs, told GeekWire that Rep The Squad is “a uniquely Seattle startup story” given its executive team, investors, and connection to Labs. He lauded Watkins as a leader who can help turn the idea into a viable business.

“Brian has all the key ingredients we look for in a Madrona Labs spin-out company co-founder and CEO — passion for the market (sports); track record in the domain (e-commerce), and the grit and resilience required to take an early-stage company to the next level,” Fridgen said.