Christmas came early for the folks at Tomofun.

The Bellevue, Wash.-based startup and maker of Furbo, a popular AI-powered dog camera and feeding device, saw sales soar after its product was featured on The Ellen Show this week.

Host Ellen DeGeneres and special guest Jennifer Lopez gave the Furbo a ringing endorsement as part of the show’s annual 12 Days of Giveaways. The episode sparked a rush of sales that are up 20X over the last 36 hours, said Andrew Bleiman, general manager for Tomofun’s North America operations.

“We’re hard-pressed to dream up a better fit and bigger reach for Furbo Dog Camera than The Ellen Show,” Bleiman said. “Ellen is a huge dog lover and the combination of getting to peer into the secret life of your pet and toss it treats seems to resonate with her.”

This is actually the second consecutive Ellen Show appearance for Tomofun, which made it into the 12 Days of Giveaways last year after the company sent a Furbo device to DeGeneres. The startup provided an update about Furbo’s new features earlier this year and earned another selection.

“It’s the No. 1 gift on every pet lover’s wish list,” DeGeneres said on this week’s show. Each audience member received a free Furbo — watch the video above to see their excited reaction.

Furbo is the brainchild of Victor Chang and Maggie Cheung. The husband-wife founding team started Tomofun in 2014 and two years later released Furbo, a device billed as “the only treat-tossing dog camera designed specifically for dogs.” 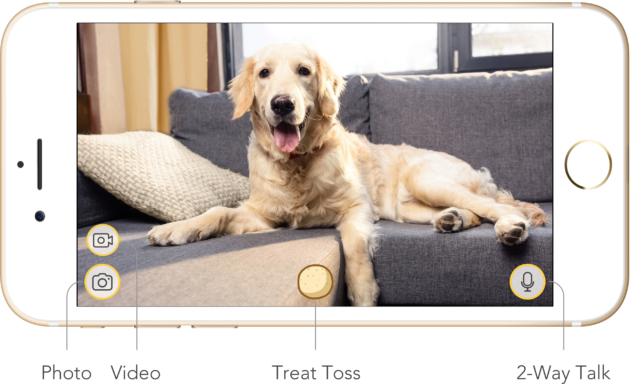 Furbo, which retails for $249, can detect when a dog is barking, pacing or chewing and automatically alerts owners when certain behaviors are happening. It’s the best-selling dog camera on Amazon in ten countries.

Tomofun has more than 50 employees spread across offices in Bellevue, Taipei, Tokyo, and Munich. It’s part of a growing number of tech companies seeing big growth in the pet industry. Funding in pet startups surged to $291.8 million in 2017, up from $67.2 million in 2012, according to Crunchbase. Another pet startup in the Seattle area, Rover, raised a $155 million round in May and is one of the highest-valued privately-held startups in the Pacific Northwest.

Tomofun chose crowdfunding to help fuel the company’s early efforts. It launched an Indiegogo campaign in 2016 and became one of the fastest-growing crowdfunding campaigns in history.

Learn more about Tomofun with our Startup Spotlight feature from February.