When Liz Pearce needed help finding movers, she didn’t want to blast the news of her home relocation on Facebook. So she defaulted to browsing online reviews and making a random pick.

That didn’t turn out well. The movers were inebriated the entire time. “I just hired someone off the internet and it was a terrible experience,” Pearce recalled.

The next time she had to move, Pearce used Fresh Chalk, a new Seattle startup she’s leading as CEO and co-founder. 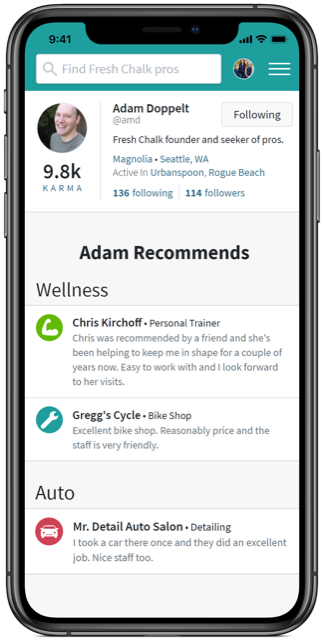 “I found someone that my friend on Fresh Chalk recommended — I would have never thought to text him,” Pearce said. “And the movers were awesome. That’s the market space we’re trying to fill.”

Fresh Chalk is up against some serious competition. There are several places you can go to find local professionals for a variety of services — Google, Yelp, and Facebook are the market behemoths.

But the company’s experienced tech founders believe they have come up with a faster and more efficient way to find everything from doctors to plumbers to barbers to photographers.

“If the day ever comes that I need a tattoo artist, I’m probably not going to put that on Facebook or NextDoor,” Pearce said. “But I do know three artists in Seattle that my friends used.”

Pearce — who, for the record, isn’t actually getting a tattoo — previously spent a decade at Seattle project management software startup LiquidPlanner, including five years as CEO.

For now, Fresh Chalk is bootstrapped, with no outside investors.

The original idea for Fresh Chalk came from a spreadsheet that Doppelt used when his friends asked for recommendations. Maintaining it was a slog, and forwarding contact information took a lot of time.

Fresh Chalk essentially transforms that spreadsheet into a slick social network that is built around trust — the value you place in a recommendation from a friend, versus some random stranger on the internet.

Pearce said the biggest competition comes from people texting their peers — friends and family who better understand their values, needs, and unique situation.

“At the end of the day, most people want a recommendation from their friends,” she said. “But there’s no easy place to get those.”

The site allows users to create profiles and offer their own recommendations across more than 250 categories. They can search through service providers to see which have been recommended by their friends.

When you follow a person on Fresh Chalk, their recommendations become part of your recommendation ecosystem: they show up higher in search results, they’re linked from the top of your profile page, and you’ll get notified in our newsletter when that person adds a new recommendation. You should follow people whose recommendations would carry weight with you.

Users can earn “karma” points, a reputation metric that reflects engagement with the app and increases the visibility of their reviews. But there are no star ratings like on Google or Yelp; the idea is to keep the experience simple and positive.

“Other platforms that have recommendation components can go really negative really fast and become a place where people air grievances,” said Pearce, who was most recently chief revenue officer at augmented reality startup Streem. “When you’re actually looking for someone to hire, that’s a waste of time.” 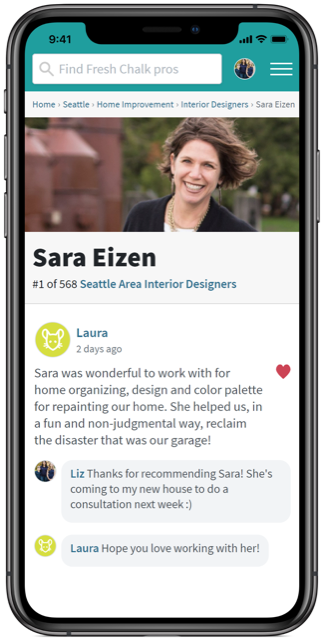 Fresh Chalk pulls information from public online sources to help bolster profiles for businesses, which can claim their listings but have limited capabilities for now.

Asked about potential revenue opportunities, Pearce said her team is focused on building a great experience for users. Advertising could certainly be one route; 96 percent of Yelp’s $236 million in revenue last quarter came from advertising, up six percent from last year.

Fresh Chalk is building out its user base in Seattle and Austin — where Kriege lives — before expanding elsewhere.

There have been various attempts at creating something similar to Fresh Chalk. Veteran Seattle tech entrepreneurs and investors Andy Sack and Chris DeVore attacked the same problem with their startup Judy’s Book in the early 2000s, but that company shut down in 2007.

The pitch from Likewise sounds familiar.

“In real life we reach out to people we know and we trust,” Likewise CEO Ian told GeekWire in October. “And in the digital world we’ve come to accept something far less than that: the opinion of the crowd and an average score. And that’s just become the normal thing, but it’s not really what most people want.”

But the resumes of the Fresh Chalk co-founders make the startup one to watch, at least. They have additional experience at places such as Mighty AI, Snapvine, Whitepages, Jobster, and others, in addition to launching and selling their own companies. Fresh Chalk also just brought on their first employees: David and Yaprak DeCarmine, co-founders of gaming community Game Jolt.