The economic winds are blowing favorably for those companies venturing into the IPO waters, with a new report released today showing that the number of initial public offerings across the globe increased by 70 percent in the first half of 2016. There were 772 companies that raised $83.4 billion through IPOs from January to June, making the first half of the year the most active period globally for IPOs since 2007.

“Economic fundamentals are improving in the major developed economies and IPO pipelines are building,” said Dr. Martin Steinbach, EY Global and EY EMEIA IPO Leader in a press release. “Activity is underpinned by rallies in many bull markets reaching all-time highs, while investor sentiment has brightened and global outlook is positive. With the momentum of the first half, 2017 is poised to surpass 2016 global IPO levels by both number and proceeds.”

Economic fundamentals are improving in the major developed economies and IPO pipelines are building.

And while things are percolating across the globe — especially in the Asia-Pacific region, where the 468 IPOs accounted for 61 percent of the total — it’s a bit sleepy in Seattle.

No companies from Washington state or Oregon have completed IPOs so far this year, according to the EY Global IPO Trends report.

“This has been a quiet first six months for Pacific Northwest companies, in terms of completing the IPO process and going public,” said Greg Beams, a partner in EY’s Seattle office. “Having said that, there are a number of companies that are in various stages of going public, but because of the JOBS act, they are able to do so confidentially.” Enacted in 2012, the JOBS Act allows companies to confidentially file paperwork for public offerings. 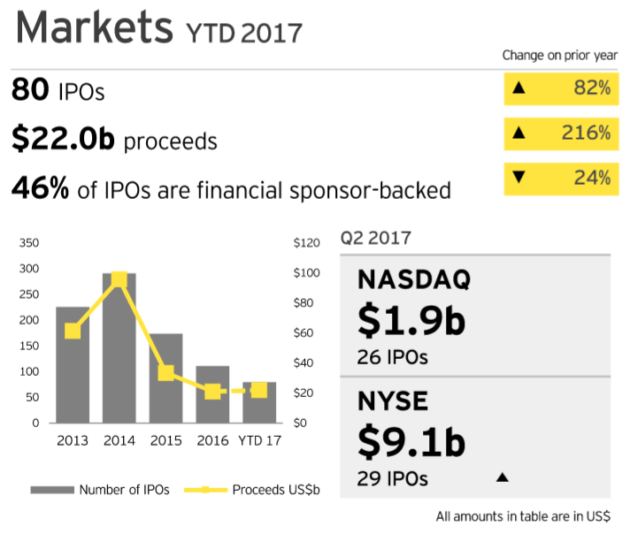 We surveyed several venture capitalists earlier this year from the Seattle area to get their thoughts on tech trends for the year, including the number of IPOs from Washington state companies. Their predictions ranged from two to four companies, with some of the top contenders being Avalara, Avvo, Redfin and Adaptive Biotechnologies.

“While there was a broad expectation after the lean years of 2015-2016 that 2017 would see a number of companies racing to the IPO pearly gates, we haven’t seen the stampede,” said Bryant, adding that there are three reasons driving this trend. “First, the public market reception to IPOs is still uneven.  A few seem to be working — Mulesoft and Okta — while others — Snapchat and Cloudera — are finding the public market focus on meeting/beating short term expectations to be a challenge.  Second, the goal posts have shifted from 2015.  The general requirements are now closer to $200 million revenue — up from $100 million — with line of sight to profitability within 4 quarters (was closer to 2 years) while growing 30-50 percent year-over-year (unchanged).  Finally, despite the pullback from mutual funds and hedge funds coming into pre-IPO opportunities, there continues to be ample available late-stage private capital.”

“The sentiment is strong for the second half of 2017,” said Jackie Kelly, EY Americas IPO Markets Leader. “More marquee company names have entered the filing process and first-day performance remains steady. This combination has been the catalyst for building a solid pipeline for the remainder of the year.”