Nearly every major smartphone app built over the last several years has gone through countless improvements and iterations. But the native phone dialer is an exception — and now a Seattle startup is looking to change that.

Founded last year after spinning out from Whitepages, Hiya is known for its caller ID and spam blocking app — formerly known as Whitepages Caller ID — that helps provide users with more information about incoming calls to their smartphone. It also recently debuted a way for iPhone owners to block spam SMS and MMS messages.

Hiya’s business started taking off when it partnered with Samsung to pre-install its spam blocking technology directly within the phone dialer app on popular smartphone devices like the Galaxy and Note. The company also inked a deal with AT&T, which uses Hiya for its own AT&T Call Protect service for automated blocking of spam calls.

Since then, Hiya has also partnered with T-Mobile and ZTE. The service, which collects phone number data from a variety of sources, now analyzes more than 3.5 billion calls and texts per month for more than 20 million users in 196 countries. 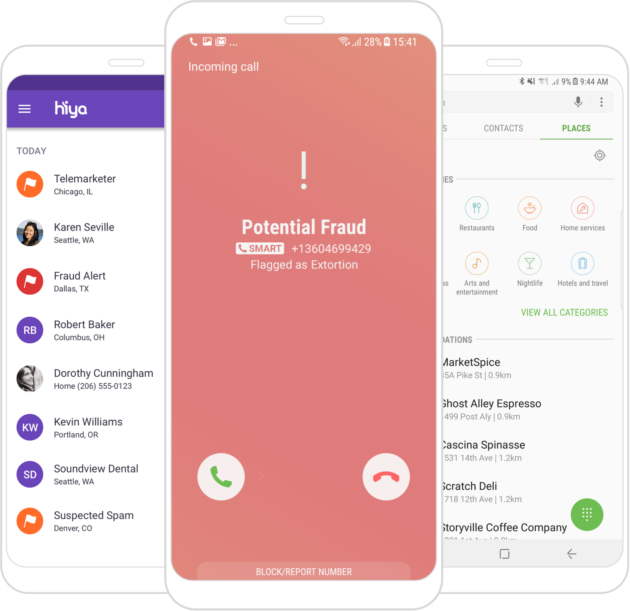 While the startup will continue developing its standalone “Caller ID & Block” app, Hiya sees big revenue-generating opportunities to partner with more companies and get its technology into native dialer apps.

“We came to an important realization that the fastest path to growth might be to embed our service together with partners into the native phone experience,” Hiya CEO Alex Algard told GeekWire.

Algard, who co-founded Whitepages 20 years ago and handed off the CEO reins last year as he transitioned to Hiya, is particularly excited about providing more context about “wanted” calls. Hiya’s first foray with this started earlier this year when it helped Samsung add business search capability within the Galaxy S8 dialer. S8 owners can use the “Places” tab on the dialer to find a local business and make a call without having to switch apps.

“Today we primarily make money through partnerships,” Algard said. “Over time we are going to market with opportunities for businesses to enhance their identity in their phone interaction with consumers.”

At the same time, Hiya will continue to build out its spam-blocking technology. The company said there were a record 29 billion robocalls made to U.S. mobile phone numbers in 2016. The FCC even created a Robocall Strike force last year to address this problem.

Algard said that tools to place high-volume phone campaigns are more accessible, while the cost of making a phone call is declining.

“When you combine these two trends, it makes it easier and more profitable for spammers to engage their campaigns,” he explained.

The fresh cash will be used to expand Hiya’s product development and grow the business globally. Hiya will also use the money to double its 52-person team across four offices worldwide — 40 are located in Seattle — over the next year.

Algard relocated his family to London last year to help set up Hiya’s office there and lay the groundwork for global expansion. He still spends a significant amount of time in Seattle, and plans on eventually returning.

Algard added that Hiya and Whitepages are completely separate entities at this point, other than being office neighbors in Seattle.

Along with Algard and now Fjeldsoe-Nielsen, other Hiya board members include Pioneer Square Labs Managing Director Geoff Entress and Xealth CEO Mike McSherry.

“The Hiya team is embarking on a huge journey to tackle the ever-growing menace of spam and scam calls at a global scale, and in the process it’s building a worldwide database of local businesses,” Fjeldsoe-Nielsen said in a statement. “We’re incredibly excited about the potential of Hiya’s contextual technology embedded within the dialer app, which facilitates a connection between local businesses and consumers at the optimal moment.”