Koru’s pivot seems to be working well so far.

The Seattle startup just reeled in a $3 million round from mostly existing investors that was led by First Round Capital, pushing total funding to date to $15 million.

Koru launched three years ago as a “bootcamp” platform that helped employers find top entry level talent and graduates land jobs. The company raised an $8 million Series A round led by Maveron in January 2015 and won the Startup of the Year at the GeekWire Awards in May 2015.

But late last year, Koru realized a new opportunity that could scale faster and help alleviate a pressing problem for enterprises: predicting performance of potential employees before, not after, they are hired.

Koru pivoted to a SaaS enterprise model and now calls itself “the leader in predictive hiring.” It helps customers like Zillow and Bridgepoint Education identify talent using machine learning and data related to a company’s performance drivers. It also incorporates individual assessments based on the Koru7 Impact Skills, which are seven “soft skills” — grit, rigor, impact, teamwork, curiosity, ownership, and polish — that lead to strong performance based on Koru’s research. Koru funnels all this information into an online dashboard that ranks candidates and gives recruiters access to individual candidate profiles.

“We can help companies predict the performance or culture fit of their hire before they meet them,” Koru CEO Kristen Hamilton told GeekWire.

The idea is to quickly provide a holistic assessment of a job candidate based on qualities beyond traditional metrics — GPA, college reputation, past employers, etc. — and on a company’s specific needs.

“Those things are not predictive of performance,” Hamilton said of the traditional metrics. 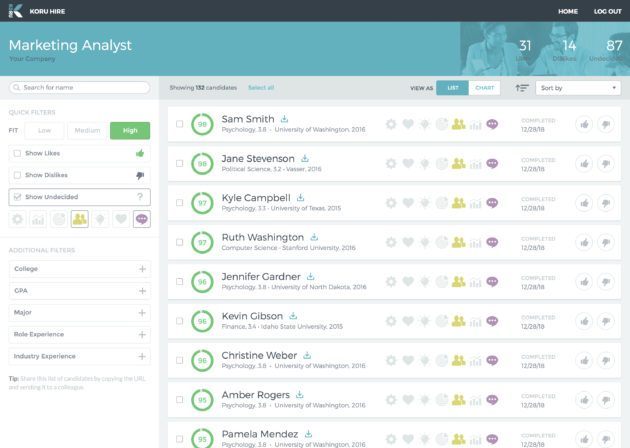 Hamilton, who is speaking today at LinkedIn’s Talent Connect conference in Nashville, Tenn., said the fresh funding will go toward growing Koru’s sales and marketing teams.

Hamilton, who co-founded Koru with Josh Jarrett, noted that the company’s original mission has not changed despite the pivot. Koru is still aiming to help improve the hiring process for employers, albeit now in a different way.

I’ve learned that not all startups go up and to the right from the beginning.

Hamilton talked about how predictive hiring can help companies connect cultural values with job competencies at a Microsoft conference earlier this year.

Hamilton previously co-founded a Seattle startup called Onvia that went public in 2000. She was also an entrepreneur-in-residence at Maveron in 2013 and is the former COO of World Learning, which had more than $100 million in annual revenue and employed more than 1,500 people.

The Koru CEO said she’s proud that her company’s culture — failing fast and cheap, while maintaining a learning mindset — has stayed consistent despite the changes.

“I’ve learned that not all startups go up and to the right from the beginning,” she added.

Koru, which employs 18 people and also has backing from the rapper Nas, published a study today that examines the factors that predict success for inside sales professionals.

Predictive Analytics for Hiring in 5 Minutes from Koru | Predictive Hiring for Fit on Vimeo.