Sprig, SpoonRocket, and Maple went out of business. Munchery laid off staff and recapitalized. Postmates is struggling to turn a profit. 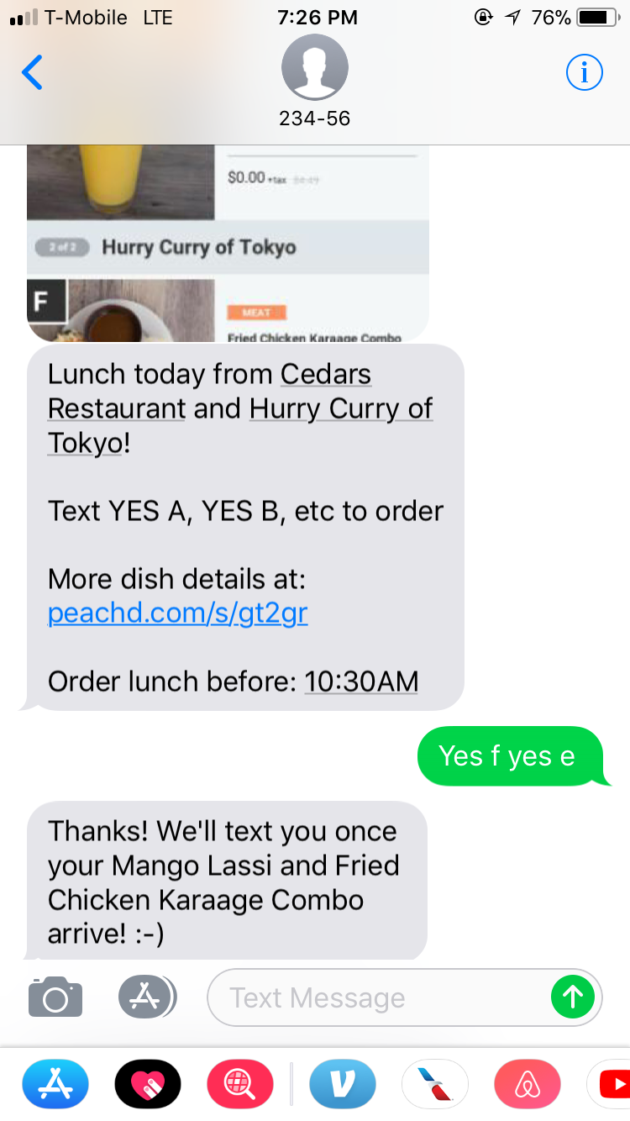 Peach, meanwhile, is turning out to be an exception in the world of food delivery.

More than three years after launching, the Seattle lunch delivery startup has dialed in its business model and is now profitable in all three of its markets: Seattle, San Diego, and Boston. Today the 55-person company announced plans for expansion in Dallas next month, and will launch in four or five additional cities next year.

Peach has differentiated itself from the plethora of food delivery startups that collectively raised more than $6 billion across 300-plus deals from 2014 to 2016, according to CBInsights.

The company focuses on delivering multiple lunch orders to office buildings. More than 400 restaurants and 1,300 companies are currently on the platform across three markets.

Each morning, Peach sends a text message to members with a link for that day’s selected dishes, which rotate daily from various restaurants and range from $10 to $14 on average, including taxes and fees. Customers have 90 minutes to place an order by responding with a “yes” text, and the food shows up about an hour later at their office. You can also order via the Peach website.

It’s a simple process that lets customers order lunch in the same way they’d text a friend. It’s also efficient for drivers, who can deliver multiple meals to the same location, instead of a single order to one customer. The cost of delivery is distributed among multiple customers, rather than just one.

This technology-powered model lets Peach keep food prices affordable for customers while paying drivers a reasonable wage. Peach co-founder and CEO Nishant Singh said the company now has margins around 20 percent on each order, which he said is unheard of for today’s food delivery services.

“The reason is because of our model,” he told GeekWire. “We aggregate the demand.”

Peach also helps restaurants generate business even before they open their doors to walk-in customers. Singh said one restaurant in Seattle was getting so many lunch orders from Peach that it expanded its kitchen for an assembly line.

The Peach model also helps restaurants be efficient with preparation since the service only gives customers one or two options to pick from.

“We’ve made a manufacturing line for mom-and-pop restaurants,” Singh noted.

Singh is an ex-Amazon engineer who co-founded Peach with his former colleagues, Denis Bellavance and Chenyu Wang. He said their time at Amazon helped teach the co-founders about maximizing efficiency.

“One thing we totally accept is that because of our Amazon training, we have a leg up compared to the other delivery services,” Singh said.

We get it now. We understand it now, inside and out.

But the CEO added that Peach has developed its own innovative strategies for delivery, particularly for lunch orders delivered in bulk that need to stay hot until reaching the customer’s desk.

“We get it now,” Singh said. “We understand it now, inside and out.”

The Amazon connection is even more noteworthy given that the Seattle-based tech giant launched its own office lunch delivery service in Seattle more than a year ago called Daily Dish, which GeekWire tested.

An Amazon spokesperson confirmed that Daily Dish is still available in Seattle, but it doesn’t seem to be available in other cities, according to Amazon’s website. Amazon has several other food-related businesses, ranging from its restaurant delivery arm to its recent $13.7 billion acquisition of Whole Foods.

Amazon and Peach are just two of countless companies, ranging from scrappy startups to well-funded tech giants, that are trying to build businesses around food delivery — both with ready-to-eat meals, and groceries. There was a rush of investment in this category in the early 2010s, but many companies haven’t found success with the business model.

CBInsights this week noted that “activity in the space has begun to cool.” Here’s a timeline it created that shows U.S. food delivery startups when they first raised funding, and subsequent mergers, acquisitions, IPOs, or shutdowns.

While many companies have either closed or merged, others have found success. For example, food delivery giant Grubhub reported $867 million in sales last quarter, up 18 percent from a year ago. Uber said last month that its UberEats business is profitable in 27 of 108 cities; it is also expanding its partnership with McDonald’s. Domino’s saw profit increase nearly 20 percent in the most recent quarter and is investing in delivery technology like self-driving cars and voice ordering.

Clearly there is still opportunity with better technology and consumers making more purchases on their smartphone. Last year McKinsey reported that the global food delivery market was $1 billion, or 1 percent of the total food market.

After tweaking its model for nearly four years, it seems Peach may be one of the early winners, which is impressive given that the startup isn’t working with a huge pool of cash. The company, one of the “Seattle 10” startups from 2015, has raised $10.75 million to date from investors like Madrona Venture Group, Maveron, and Vulcan Capital. It also offers corporate catering services and “Peach Perks,” which lets companies subsidize lunch for their employees — Uber, Convoy, and others use this in Seattle.