Esports is a $700 million global industry, and growing rapidly. And while traditional sports fans may scoff at professional video gamers dueling in heated on-screen matchups of League of Legends or Overwatch, these competitions draw millions of dedicated and passionate online viewers.

Now a Seattle startup wants to capitalize on this digital craze, offering esports fans a way to compete against each other while they watch live broadcasts of pro esports competitions.

The idea of wagering on the outcomes of esports may seem bizarre to some — and quite meta. After all, it’s essentially a game going on inside of a game. But a high-profile group of investors clearly think there’s a big business to be built in the nascent area of esports viewership.

Ben Gilbert, the fourth PSL founder, is CEO of Taunt, which bills itself as an “esports fan competition platform.” The idea is to give esports fans a competition of their own while watching a live stream of a video game like League of Legends or Dota 2. 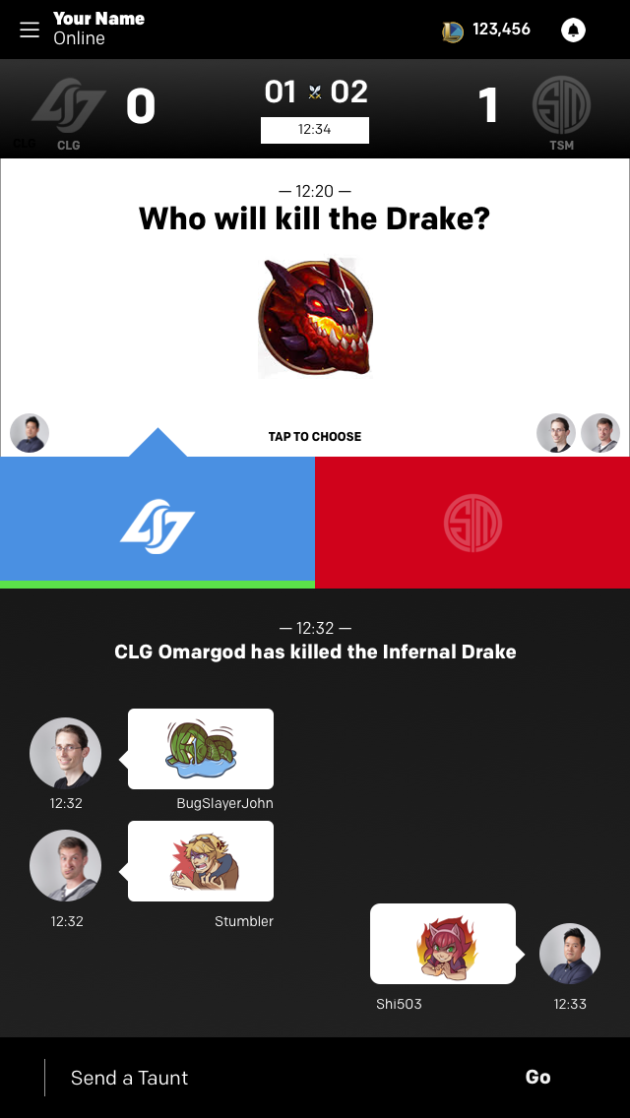 Taunt is to esports what fantasy sports is to the NFL — a platform that lets fans compete against each other, using data and information from professional matchups.

But Gilbert noted that while other companies have tried to take an idea like traditional fantasy sports and apply it to esports, he thinks there’s a better way to bring structure around esports fan engagement.

“Fans want something that’s built specifically for the games they love,” Gilbert told GeekWire this week. “The large amount of data and machine learning we’re using under the hood allows us to create this of esports-specific real-time experience.”

Here’s how it works. Taunt users can join a virtual room on the platform while they are watching a broadcast on Twitch or other streaming sites.

Every few minutes they’ll be presented with a challenge like, “which team will get the next kill?” or, “will a tower go down in the next two minutes?” They then earn reputation and collect badges for correct predictions.

Gilbert, named Young Entrepreneur of the Year at the GeekWire Awards in May, described the platform as a “game outside the game experience.” It doesn’t compete with broadcast platforms like Twitch or Mixer, but instead works in tandem with them.

“Fans can watch broadcasts however they choose, and use Taunt on their mobile phone or in another browser window,” Gilbert explained. “The incentives are aligned with both the broadcast platform and the publisher, because it provides a deeper level of engagement between a fan and the game they’re watching.”

The company doesn’t expect to add gambling or betting functionality to its platform like other esports startups have already done — Seattle-based Unikrn, for example. It’s more akin to a Zynga Poker or Clash Royale-type gaming experience, which provides non-cash rewards.

“The motivation to play is one, to have more fun while you’re watching matches, and two, to challenge your friends to see who knows the game better,” Gilbert said.

Brad Feld, founder of Foundry Group, will join the company’s board with Gilbert and Galgon as a result of his investment. Feld likened Taunt to Zynga, the social video game giant that his firm backed in its early days.

Related: How this ‘startup studio’ quickly axed 22 ideas and spun out three companies in one year

“Zynga built social games on top of the tidal wave of social networks,” Feld said in a statement. “The phenomenon of esports provides a new frontier for similar types of interactive experiences.”

There is certainly a large potential user base for Taunt as the global esports audience base is expected to reach 385 million in 2017. The 2016 League of Legends World Championship, for example, had 43 million unique viewers. Fans love watching pro gamers battle against one another — just check out the scene in August at Valve’s big Dota 2 tournament at Key Arena in Seattle.

Taunt, which employs five people, is PSL’s fifth spinout. The studio, which launched in 2015, hired longtime Seattle entrepreneur Matt Hulett in May to pursue an esports-related idea, but Hulett departed for Rosetta Stone in August.

The other four PSL spinouts are:

Taunt is also one of several esports startups in the Seattle area — others include Unikrn, GawkBox, Matcherino, RumbleMonkey, and others. Those companies are in addition to tech giants like Amazon and Microsoft that also are investing in esports — Amazon with Twitch, and Microsoft with Mixer. The region is also home to countless gaming companies — Washington Gov. Jay Inslee last month called the region “the center of the casual gaming universe.”