Typically in today’s technology world, startup founders sit on one side of the room, pitch ideas to investors, and hope to land funding for their company.

But when you’re growing as quickly as Rover, a six-year-old pet-sitting startup that continues to expand, it works the other way around.

“Frankly, we were very persistent,” said Spark Capital General Partner Megan Quinn, who will join Rover’s board. “We’ve had a chance to get to know Aaron and the company over several years and have been consistently impressed by their ability to out-execute the competition through hustle and drive.” 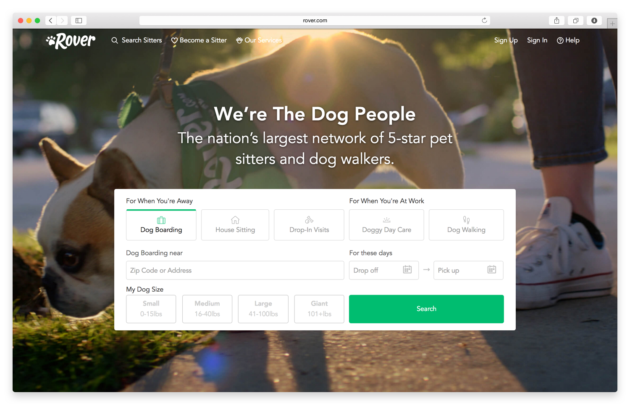 Founded in 2011, Rover runs the largest pet services marketplace that helps match more than 140,000 vetted sitters across 10,000 cities in North America with pet-owners looking for someone to take care of their dogs and other animals. A service is booked on Rover every four seconds.

Easterly said Rover is still on track to reach initial profitability by the end of this year, and that an IPO is still the “most likely eventual outcome.” That was the case when the company raised a $40 million round last year.

But after Spark expressed interest, Easterly said it made sense to raise more money from a “great group of investors” to help fuel international expansion, drive more marketing, and launch new services for pet owners and sitters.

“Our core business is doing really phenomenal,” Easterly noted. “But we wanted to be open to additional avenues to accelerate growth. We could have continued to play it out, but this gives us a lot more flexibility to throw some fuel on the fire.”

Even though Rover acquired its main competitor DogVacay in March and will triple its net revenue this year — just like it did in 2016 — Easterly said it’s early days for a company born out of a Startup Weekend event that has now raised $156 million and employs 236 people.

“We’re a long ways away from making pet care so simple and affordable that everyone in the world can have a dog in their crazy, modern lives,” he said.

According to the American Pet Products Association (APPA), pet sitting/boarding/walking is a $5.7 billion industry that is projected to grow another 6 percent in 2017. The pet industry as a whole will reach nearly $70 billion this year, APPA estimates, while more than 60 million U.S. households own a dog.

Rover has capitalized on increasing pet ownership with a peer-to-peer online marketplace that offers an alternative to asking a family member or friend for help, or having to use a traditional kennel.

Stats and surveys show how in many cities, there are more households with dogs and cats than households with children, and that people often consider pets as loved family members (have you walked around Amazon’s campus lately?). Tierra Bonaldi, a spokesperson for APPA and pet lifestyle expert, said that pet owners want peace of mind that their pet is being taken care of properly. She said services like Rover are especially popular among millennials, which have become the new majority demographic of pet owners.

“Because there are service options out there like Rover.com providing a pool of dog sitters to choose from, with reviews, references, background checks, and profiles that are available at any given time, it makes for an incredibly convenient and popular option for pet owners,” Bonaldi noted. 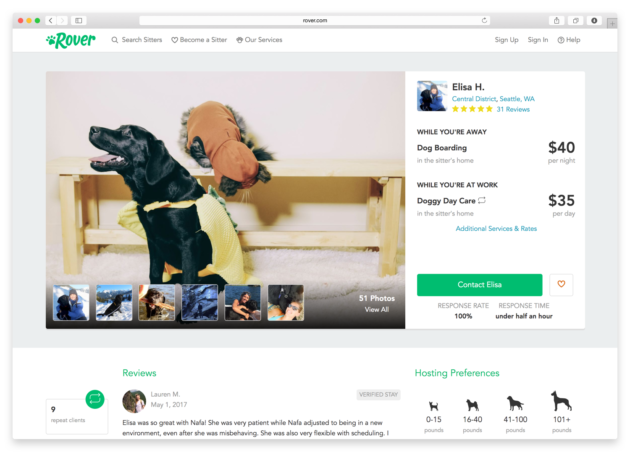 Part of Rover’s big growth is due to rich data the company has collected and how it can effectively vet the marketplace. As more sitters use the platform and are reviewed after each service, Rover can better match pet owners with an appropriate caretaker.

Emphasizing reputation also helps maintain quality control and creates trust between pet owners and sitters. Rover only accepts 20 percent of potential sitters, and more than 95 percent of reviewed bookings have received a perfect 5-star rating. Each service is backed by insurance and a 24/7 support team.

“Over time, Rover has built up this enormous supply of not just vetted caretakers, but reviews about those caretakers,” said Quinn, who was previously a director at Square before joining Spark Capital. “The secret sauce has really been turning those reviews and the reputation system into an algorithm that appropriately matches the right caretaker with the absolute right sitting opportunity. We think that’s really special, incredibly unique, and impossible to replicate.”

Easterly, who won the CEO of the Year honor at the 2016 GeekWire Awards, said Rover has focused on being data-oriented since the company launched six years ago. As the Rover collects more data, it becomes easier to acquire customers over time, and those customers tend to be more loyal, he said.

“That dynamic in our business — how data improves the value of our customer and reduces our customer acquisition cost — is pretty unique,” Easterly added. “Most businesses don’t have that dynamic six years in.”

We are trying to make pet ownership, particularly for those living in an urban area, not just a luxury good, but part of a well being for everyone.

But the business is about more than just numbers. Easterly, a dog lover himself, wants everyone to have the opportunity to own a pet.

“I challenge people to name a more important development in the history of humankind for improving human happiness than the domestication of pets and dogs,” he said.

Yet many people who would be great pet owners often shy away from doing so because of affordability and logistics, Easterly explained. That’s partly why Rover aims to make owning a pet more convenient and affordable.

“We are trying to make pet ownership, particularly for those living in an urban area, not just a luxury good, but part of a well being for everyone,” Easterly said. 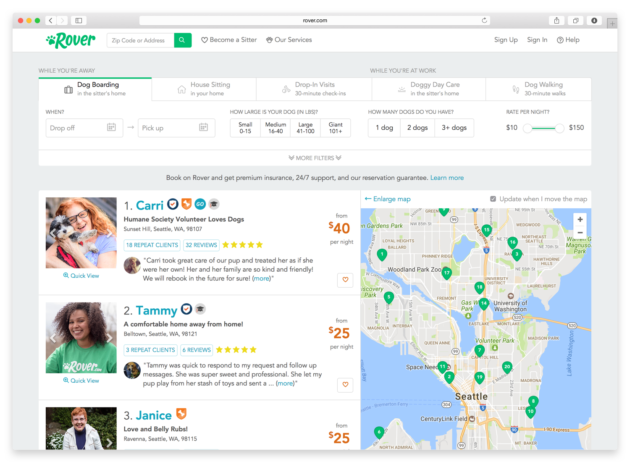 Greg Gottesman, co-founder at Pioneer Square Labs and venture partner at Madrona Venture Group, helped first conceive the idea for Rover at the Startup Weekend event in 2011. He noted that “from the beginning, Rover has offered a vastly better service to dog lovers that is less expensive than traditional commercial offerings.”

“Better and cheaper is a great place to start,” he added.

Rover has been testing its service in Canada and plans to expand to more countries with the new funding — Easterly called international expansion a “huge opportunity.” He also said Rover will look at acquiring more companies and offering more services or features. For example, Rover last year updated its app to allow dog owners to see exactly what their pooch is up to when they are away, like a GPS map of the dog’s walk, photos of the dog while in their care, notes of any bathroom breaks, and more.

There is also opportunity to go beyond dogs. In fact, the fastest-growing dog “breed” on Rover is “cat.” The company has also seen everything from pigs to shrimp on its platform.

As far as the IPO, which has been rumored for awhile now, Easterly said Rover isn’t in a rush to test the public markets.

“We are still at a level of growth that is not easy to predict — it’s a lot easier to predict a business growing in the 3-to-6 percent range than it is for businesses that are tripling,” he said.

Rover could be part of a trend of more companies raising late-stage deals. PitchBook, in its most recent venture capital report, described this as “the next exit,” as the number of late-stage transactions increased for the third-straight quarter.

Rover, which also has investment from Petco, has often drawn laughs from critics who believe it isn’t a legitimate tech businesses, harkening back to the dot-com boom days of Pets.com. But just as companies like Uber, Lyft, Airbnb, Postmates, and others have created new peer-to-peer marketplaces, Rover is doing the same within the pet industry.

Gottesman said the sky is the limit for Rover, even six years after the hackathon that started this entire idea.

“I know the Rover team still thinks this is inning number one,” he said. “We have hundreds of millions of dollars going through the platform and over one hundred thousand sitters and walkers, and still the vast majority of people have never heard of Rover. We are still just scratching the surface of the opportunity.”