The Seattle startup scene is booming.

PitchBook and NVCA this week published the latest numbers from their Q2 Venture Monitor. Seattle-area startups raised a record-setting $3.1 billion across 205 deals in the first half of 2021. That’s up from $1.8 billion across 162 deals during the same period last year.

It’s not just Seattle. Other startup hubs including the Bay Area ($54.1 billion) and New York City ($22.4 billion) are also setting massive funding marks in a different ballpark than Seattle.

But by its own standards, Seattle’s startup scene has never been stronger.

The larger region is also growing. Tech companies across the Pacific Northwest have raised more than $5 billion this year, according to GeekWire’s funding tracker. That’s more than double from the year-ago period.

Nationally, VC deal activity has already hit $150 billion and will crush last year’s record of $156.2 billion, according to the Venture Monitor. IPO dollar volume for 2021 has also surpassed record totals of last year, and same goes for mergers and acquisitions. 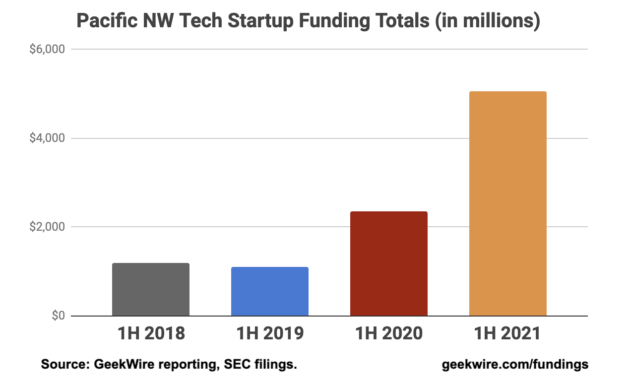 A large chunk of the recent venture capital funding is from so-called mega-rounds that have minted several new unicorns, or privately held tech startups valued at more than $1 billion. Fast-growing Seattle-area companies including Highspot, Zenoti, Outreach, Rec Room, and Amperity have raised venture capital rounds of $100 million or more in the past six months.

The Seattle region now boasts at least 12 “unicorns” — just five years ago, when GeekWire analyzed CB Insights’ list of unicorns, no Seattle-based startups made the cut.

Seattle did lose a unicorn this year. But that was because security startup Auth0 was bought by Okta for a whopping $6.5 billion — one of the largest acquisitions in Seattle tech history, and a reflection of the ecosystem’s maturity.

“With the Fed having pumped trillions of dollars into the economy, it’s no surprise that this added liquidity has found its way to the private market,” he told GeekWire. “That said, if you believe the pandemic has led to massive change and dislocation, I can’t imagine a better place to be betting right now than new technologies that are trying to take advantage of these changes for both consumers and businesses.”

Podcast: What’s the deal with all the deals? Why the market for IPOs, venture capital and acquisitions is red hot

The fresh funding is helping Seattle startups ramp up hiring, setting the stage for even more growth.

Data from Adam Schoenfeld‘s Seattle Startup Hiring Tracker shows 8,518 open roles across 393 startups — that’s up from 2,968 open roles in the year-ago quarter. Companies hired an additional 4,562 employees in Q2 of this year, growing overall headcount by 6.4% from Q1.

And the pool of available talent to hire from continues to widen.

The Seattle region added more than 48,000 tech jobs from 2016 to 2020, an increase of more than 35% — growing at a faster rate than any other large U.S. tech market, according to a new analysis by the CBRE real estate firm.

Much of that tech job growth is driven by hometown tech giants Microsoft and Amazon, which both surged during the pandemic. Microsoft has nearly 3,000 open roles in the region, and Amazon has more than 13,000. There’s also the expansion of Silicon Valley engineering outposts in the Seattle area, with Facebook, Google, and others continuing to expand their footprints.

Having those giants nearby can help boost available talent, but also make it harder for startups to offer competitive salaries. And some theorize that big tech companies — not just Amazon and Microsoft but Expedia, T-Mobile, Zillow Group, Zulily, F5 Networks, and others — stunt Seattle’s startup scene, sucking up would-be entrepreneurial talent.

But Heather Redman, managing partner at Seattle’s Flying Fish, said she’s seeing more and more people come out of Amazon in particular to start companies. Some recent examples include Shipium, Dendron, Freightweb, Pandion, and others.

There’s also a company like Convoy, a Seattle digital freight startup launched by two former Amazonians in 2015 that was valued at nearly $3 billion in 2019 and continues to grow. Now there are former Convoy employees who are starting their own companies, such as Candidate and Common Room.

It’s another example of Seattle’s evolution as a startup city, one that last year moved into the top 10 of Startup Genome’s annual global startup ecosystem rankings.

Newer startups also now have access to more local funding and guidance, with early-stage firms like Flying Fish, Pioneer Square Labs, and Fuse sprouting up over the past decade, providing local capital for companies just getting off the ground.

There are even programs such as Venture Out designed specifically to help people leave big tech companies and launch startups.

There seems to be even more growth ahead for Seattle’s startup scene. “We expect to see continued breaking of records for fundraising and hiring as the year goes on,” noted Redman.

However, she added that if the city does not tackle issues such as housing affordability, “we risk losing this momentum in a few years.”

Tech hubs such as Seattle have become centers of opportunity for some while squeezing out others. More tech money flowing into the region could mean an expanded tax base, but it also could exacerbate the housing density dilemma. Redman said the city needs to consider radical approaches, such as moving the Port of Seattle and using its existing land for housing.

For now, though, “this region remains a great place to live and work relative to alternatives,” Redman said.