New funding: Seattle-area startup SeekOut raised $65 million to fuel growth of its recruiting software. The 4-year-old company is profitable and saw annual recurring revenue spike 10X over the past 21 months. The Series B round, led by Tiger Global with participation from Madrona Venture Group and Mayfield, values the company at close to $500 million. SeekOut previously raised a $6 million round in 2019.

SeekOut’s tech: The company’s “Talent 360” software is like LinkedIn on steroids. It pulls information on potential hires from sites such as LinkedIn and GitHub; from research papers and patents; and other public domains. Its algorithms can also make assumptions based on various data — for example, whether someone might have a security clearance. The platform has built-in diversity filters to help reduce unconscious bias; an automated messaging tool; and a search engine that understands past hiring patterns and needs based on job descriptions.

Tailwinds: Companies are putting more effort into their diversity, equity, and inclusion efforts, or DEI. That’s driving demand for a tool such as SeekOut, which allows companies to search for candidates based on race, gender, and more. An increasing emphasis on data-driven decision-making and the tech talent gap are also benefiting SeekOut. 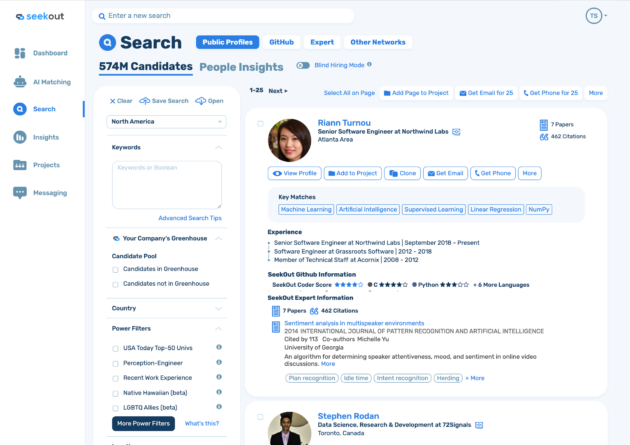 Customers: SeekOut is used by six of the world’s top 10 most valuable companies. Customers hail from a variety of industries but tech, defense, and pharma make up a large chunk. Salesforce; Waymo; Rover; Merck; Twitter; and VMware use SeekOut.

Competition: The Seattle startup competes against a flurry of existing hiring and recruiting-related tools. There are recruiting and HR giants such as LinkedIn and Workday. Smaller startups including fellow Seattle companies Karat — which also raised a Series B round led by Tiger Global — and Textio sell software for specific parts of the recruiting process, such as facilitating interviewing or crafting job descriptions. Others that have raised cash in recent years include Eightfold AI; Hiretual; Hired; Greenhouse; Hireology; Workable; and Beamery.

Founder pedigree: SeekOut is led by CEO and co-founder Anoop Gupta, a former technical assistant to Bill Gates who previously led Microsoft’s Unified Communications Group; and CTO Aravind Bala, a former Microsoft partner engineering manager who worked on products including Bing and Office. Other co-founders include Vikas Manocha and John Tippett, who both also worked at Microsoft.

Startup backstory: SeekOut’s story is a lesson in pivoting and perseverance.

The company is an evolution of Nextio, a professional messaging service formerly known as Telo that Gupta and Bala founded. The premise of Nextio was to give recipients of promotional LinkedIn messages money paid by marketers, recruiters and others seeking to reach them.

While Nextio never took off, there was a “career insights” feature that analyzed millions of resumes to give users a birds-eye view of potential career paths and the necessary steps to achieve certain jobs. That garnered interest from recruiters who wanted to understand requirements for various roles at companies; how people moved from different jobs; and so forth. That led to the creation of SeekOut.

In some ways, SeekOut’s path is somewhat similar to Slack, which traces its origins to an internal communications tool used to develop an online game. That game shut down — but the tool would eventually became Slack.

What’s next: SeekOut has 50 employees and plans to hire rapidly. The startup will invest in tools to help companies assess not only external talent but also their existing employee base to aid retention, development, and DEI efforts.