Matt Meyers can build anything he wants, thanks to his decades in the lumber and building materials (LBM) space. Instead of building with wood, however, he is choosing to build software. His company Yesler, a B2B marketplace for lumber and building materials, today raised $3.3 million led by Tech Square Ventures with participation from PSL Ventures, SeaChange Fund, and Ascend.vc.

Founded in October 2019, Yesler spun out of the startup studio Pioneer Square Labs, taking input from over 50 buyers and suppliers to build its solutions. Based in Seattle, Yesler streamlines purchasing operations by replacing spreadsheets, hand-written notes, and phone calls that dominate today’s lumber yard operations. Yesler’s software aims to eliminate extra transactions and material movements between lumber suppliers and lumber buyers. (Yesler is investigating products outside of wood but is currently focused on lumber, engineered lumber, and panel products like plywood.)

As the founder and CEO, Meyers believes Yesler’s advantage is optimizing the end-to-end supply chain rather than just the transaction. Price is not the only factor that players in the market value, and volatility does not help lumber mills, nor the lumber yards or general contractors who buy lumber.

“Buyers can vary in credit quality or prompt payment and sellers can vary in reliability of production, shipping, or product quality,” Meyers explained. “Yesler allows buyers and sellers to recognize and reward these relationships with specific pricing, payment terms, and confidentiality as desired by participants.”

The company has 10 employees and is hiring several new positions this quarter. The new capital will be used to scale its marketing and software engineering teams in the greater Seattle area. Its main competitor is Chicago-based MaterialsXChange, which is building an ecommerce system for trading lumber. The new round brings Yesler’s total funding to $5.15 million.

Yesler’s technology can be broken down into three components: Yesler Analytics, Buyer’s Network, and the Marketplace.

Yesler Analytics consists of consuming lumber yard data and applying proprietary algorithms to provide stocking and replenishment plans in dashboards designed for lumber operators. Buyer’s Network (pictured below) is a free workflow tool for lumber yard buyers to group their needs into loads, invite sellers to respond to those loads, and track all the communications back to the original need. Buyers can confirm the transaction within Yesler or via their current purchasing process. 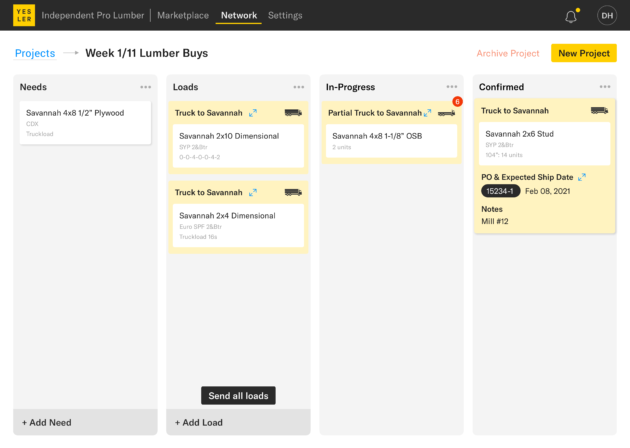 Finally, the Yesler Marketplace lets buyers request products, either from Analytics, Network, or by entering a new request. Yesler can find a supplier or manage transactions with a buyer’s existing supplier all in one marketplace, regardless of the supplier or product.

This is how Yesler ultimately makes money — the startup takes a cut on the transactions that occur in the marketplace. Sellers can see the fee before each transaction while buyers know their price was set by the seller, not Yesler.

Yesler has had some early traction, with more than $10 million in annualized purchases managed on its software through the end of 2020. All its customers are in the U.S. and while Yesler works with importers, it does not sell into other countries “with no immediate plans to do so.”

Meyers believes a tool like Yesler is unavoidable for the LBM industry. He would thus rather see an insider build the inevitable.

“For risk for our customers it is not a matter of if or when technology will transform the industry, but whether that transformation empowers the best operators in the industry to compete and win,” Meyers said. “Yesler is built by LBM insiders, for the LBM industry. We don’t manufacture, buy, or sell building materials because that’s what Yesler customers do. We are building Yesler to help our customers save time, money, and compete and win.”

“If current industry participants wait for someone from outside the industry to lead this technology transformation, they may lose control of the outcome,” he added. “Yesler’s bet is that the best operators in the industry can define how this industry transforms and win with Yesler.”