Lexion is on a roll.

The Seattle startup that helps legal teams use AI to sift through contracts has quadrupled revenue and added 50 customers over the past four months, including brands such as Outreach, Blue Nile, OfferUp, and others.

Now the company is reeling in more cash to supercharge growth, announcing a $11 million Series A round led by Khosla Ventures. It’s one of the only Seattle-area startups to land funding from Khosla, a top Silicon Valley firm that has backed giants such as DoorDash, Okta, Opendoor, Square, and others including OpenAI.

Lexion, which spun out of Seattle’s Allen Institute for Artificial Intelligence, uses algorithms to automatically parse contracts and surface relevant info. It produces an organized searchable repository and various reports.

The idea is to help legal teams that are currently using a mishmash of tools such as Dropbox and Excel. Lexion can quickly answer questions either on its platform or within other apps such as Slack or Salesforce about whether a contract is active or which have termination clauses, for example. 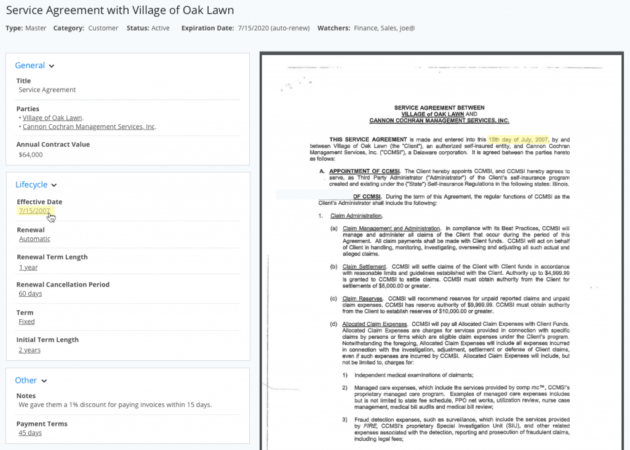 The 30-person company is part of a fast-growing segment called contract lifecycle management systems (CLMs) that includes heavy hitters such as Seattle-area unicorn Icertis and several others.

Lexion is focused on mid-market smaller companies that have a handful of legal experts whose time would be better spent on something other than wading through documents. Lexion’s simplicity, fast onboaring process, and state-of-the-art natural language processing tech gives it an edge over competitors, according to CEO Gaurav Oberoi.

“It’s going to allow lawyers to do the thing they thought they would do coming out of law school, as opposed to a lot of the administrative and menial tasks that end up taking a large chunk of their time week over week,” said Lexion CEO Gaurav Oberoi.

Lexion plans to use the fresh cash to go beyond just reporting and into workflow, helping companies streamline how contracts are approved and providing a dashboard that lets legal teams manage the process.

“This combination of cutting-edge technology, with simple and practical application, is exactly how the value of AI will get realized in corporations, and is why we think Lexion has a winning advantage in this space,” Vinod Khosla said in a statement. Khosla founded Sun Microsystems and launched his VC firm in 2004.

Oberoi co-founded Lexion with Emad Elwany and James Baird. Oberoi previously helped build BillMonk, a bill-splitting app that predated Splitwise, and also created Precision Polling, an automated survey startup that was later purchased by SurveyMonkey. Elwany previously worked as an engineer at Microsoft on artificial intelligence and Baird is an engineer who came from web development firm Pancake Labs.

Legal tech startups such as Lexion are riding tailwinds from the pandemic that accelerated digital adoption within the legal industry with the shift to remote work. Clearbrief is another newer Seattle startup that also uses AI, but for legal writing analysis.

CB Insights ranked Lexion as the most promising AI legal tech startup for the past two years.

Lexion previously raised a $4.2 million seed round in 2019 from Madrona Venture Group and law firm Wilson Sonsini, Goodrich and Rosati, which both participated again in the Series A round. Kanu Gulati from Khosla Ventures will join Lexion’s board as a result of the new funding. Total funding to date is $15.2 million.