Enterprise software companies have long dominated the Seattle and Pacific Northwest tech scene. They range from stalwarts such as Microsoft and F5 Networks, to a bevy of smaller startups developing cutting-edge software in cloud computing, cybersecurity, and other industries.

As the COVID-19 pandemic accelerates adoption of digital technology, the spotlight is shining brighter on the robust business-to-business technology ecosystem in Seattle and across the region amid the ongoing economic and health crisis.

Startups that sell to other businesses make up more than half of the GeekWire 200 list, our ranking of top privately-held Pacific Northwest technology companies, and 70% of the top 20. 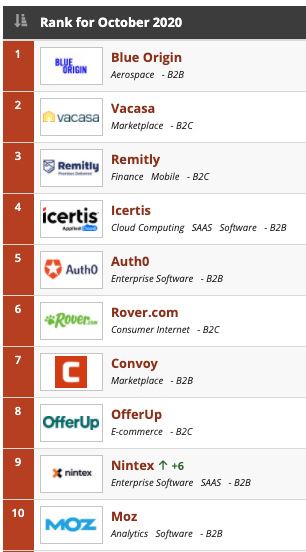 A report from OpenView Venture Partners predicts that enterprise cloud software firms are largely “recession-proof” in part due to the increased reliance on cloud services amid the pandemic.

“For the tech sector, software is eating more of the world, faster,” said Ina Fried, Axios’ chief technology correspondent, at last month’s GeekWire Summit in a reference to a 2011 quote from early internet entrepreneur and venture capitalist Marc Andreessen.

Consumer spending in the U.S. has fallen amid the pandemic due to restrictions on people moving and general anxiety about job losses, according to a recent report from Deloitte.

That could hurt B2C startups, or businesses that sell primarily to consumers. Enterprise software startups may also face headwinds if businesses pull back on their own spending. Part of that depends on the duration and intensity of the economic downturn, said Fried. But she added that “if the tech companies are getting hurt, it means the broader economy is getting hurt even worse.”

More than half of the leaders polled in September for the first-ever GeekWire 200 CEO Insights survey said their business has experienced little to no impact from the pandemic, or a positive impact. About a quarter said they project year-over-year revenue increases.

“Seeing negative impact for some of our customers causing loss of revenue, however other sectors are thriving and driving new business opportunities for us,” one CEO said.

None of the CEOs surveyed said they plan to reduce headcount this year, while more than 70% said they plan to grow their employee base. Layoffs hit the tech industry hard when the pandemic began, but many companies are now hiring.

The Seattle Startup Hiring Tracker shows that 72% of local tech companies are hiring, and 58% increased headcount over the past three months.

Enterprise startups are also attracting investor interest, adding cash to their balance sheets to weather the COVID-19 storm and extending their potential lifespans:

Another top Seattle enterprise startup, software automation company Chef (previously ranked No. 20 on the GeekWire 200), was acquired by Progress in October for $220 million.

It hasn’t been all smooth sailing for Seattle enterprise startups. Security company ExtraHop, ranked No. 16, laid off an undisclosed number of employees in April. Data management startup Igneous, ranked No. 196, just cut staff this month.

But overall, it appears Seattle’s tech economy — buoyed by enterprise technology, including the industry-leading cloud arms of Microsoft and Amazon — could help the region come out ahead of other metro areas if economic activity continues to sour.

Speaking at a New York Times event in Seattle in February, Code.org CEO and longtime tech investor Hadi Partovi said a recession “would help this region in many ways.” His logic: recessions hurt all companies, but those most impacted are ones with unprofitable business models or shaky balance sheets.

“In a recessionary environment, Amazon would be well ahead of its competitors at the tail end of that recession,” said Partovi, a former Microsoft manager and founder of iLike. “At the front end, nobody wants it. But three years later, who survived the best?”

Here’s a recap of companies moving up the GeekWire 200 this month:

Debuts and return to the rankings

Twistle (No. 193) — Healthcare startup founded in Seattle, Wash., with an office in Albuquerque, N.M. automating communication from providers to patients. See related coverage.

The GeekWire 200 — underwritten by our partners at Martin Selig Real Estate — is derived from our broader list of more than 1,300 Pacific Northwest tech startups, including Washington, Oregon and Idaho, and British Columbia. The rankings are generated from publicly available data, including social media followings, approximate employee counts (via LinkedIn) and inbound web links.

To be eligible for inclusion in the GeekWire 200, make sure your Pacific Northwest startup is included in the broader Startup List. (Please, no service providers, marketing agencies, etc.)

If you value resources like these, please consider becoming a GeekWire Member and be sure to check out our list and map of out-of-town tech companies with Seattle engineering outposts as well as our list of startup incubators, co-working spaces and accelerators in the region, startup fundings, and our GeekWork job board.