If you’re looking to build a great team, take on world-class competitors and perform at the top of your field, the world of sports offers no shortage of lessons and insights to shape your approach. And there are few professional franchises with a more entrepreneurial mindset than the Seattle Storm, the three-time WNBA champions. 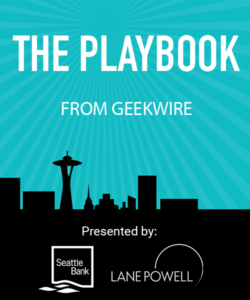 Here’s your opportunity to learn from their experience. Alisha Valavanis, CEO and general manager of the Seattle Storm and Force 10 Sports Management, will be the featured speaker for the next installment of The Playbook, GeekWire’s speaker series for entrepreneurs and business leaders.

The event will take place the evening of Thursday, Nov. 7 in Seattle. Limited tickets are available for purchase here or below.

Valavanis led the rebuilding effort that resulted in the Storm winning its third WNBA Championship in 2018, after drafting Jewell Loyd (2015 WNBA Rookie of the Year) and power forward Breanna Stewart (2018 regular season and WNBA Finals MVP) to form a new core of the team, alongside veterans such as All-Star guard Sue Bird. Valavanis has also led the franchise through adversity, as the Storm made the playoffs this year despite injuries that forced Stewart and Bird to miss the season.

In addition to putting the team together as general manager, Valavanis runs the business side of the franchise with a startup approach, negotiating key community sponsorships and partnerships.

A native of Valparaiso, Ind., Valavanis grew up playing basketball and shared the backcourt with her twin sister Alexis on the women’s basketball team at California State University, Chico, finishing her career as the program’s all-time leader in three-pointers. She went on to serve as a collegiate coach and WNBA scout, working in the front office for the Golden State Warriors and as associate athletics director at the University of California, Berkeley.

The Playbook is a GeekWire speaker series presented by Lane Powell and Seattle Bank. The event with Valavanis will take place the evening of Tuesday, Nov. 7 at The Ninety, 406 Occidental Ave. S., Pioneer Square neighborhood. Space is limited. Register on the event site or below.

[Editor’s Note: Post updated to correct the number of WNBA championships won by the Storm.]