StratusCore, a digital content production startup used by Netflix and Sony, comes out of stealth – GeekWire

The company has stayed quiet for the past several years but is now revealing details about its business and platform that is used by giants like Netflix, Sony, and more than 45,000 artists around the globe.

StratusCore offers a full suite of digital production tools for content creators that need help with editing, rendering, transferring, managing, and storing large media files both in the company’s own private cloud and on top of services like AWS and Azure. The company prides itself on its technology that provides high security and low latency, particularly given the increasing amount of data and computation required for these processes.

The platform is a one-stop shop for creatives, but also acts as an a la carte menu that allows users to pay on-demand for which services they need.

Denise Muyco and David D’Andrea co-founded StratusCore in 2010. Before the company launched, Muyco was in Vancouver, B.C., where she was recruited by Steve Arnold to help run a media production studio that focused on rendering technology.

Arnold is well-known in the media and entertainment world, having worked with George Lucas as an executive at Lucasfilm in the 1980s before being recruited by Bill Gates to lead a startup that Microsoft later acquired. Arnold then co-founded the George Lucas Educational Foundation and launched venture capital firm Polaris Partners in 1996.

Arnold originally set up the Vancouver studio to run like a co-op, but Muyco convinced him to turn it into an actual company which eventually evolved into StratusCore.

With Arnold helping as an active advisor, the startup expanded beyond a rendering service into the full suite of products it offers today.

“I have been observing StratusCore’s progress for six years, watching both the cloud applications evolve and the media and entertainment industry accept StratusCore’s platform as the new operating system for digital production,” Arnold said in a statement.

StratusCore is used by many small production companies and freelancers who are hired by giants like Sony and Netflix to help create shows, games, animations, and more. It also partners with content creation toolmakers like AutoDesk, The Foundry, NVIDIA, and Chaos Group to provide more options for users. 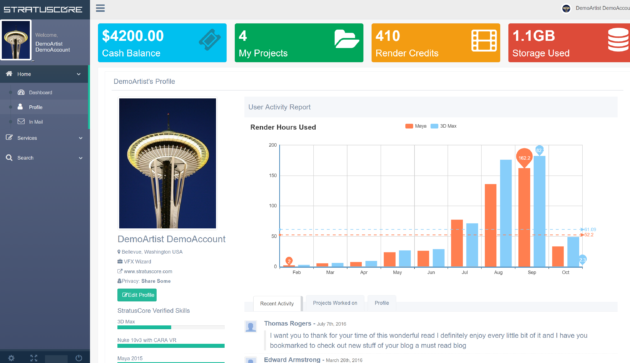 Muyco said that StratusCore separates itself from competitors because it offers such a wide range of services that are available on-demand and in the cloud, removing the need for customers to purchase expensive hardware or software licenses. It’s similar to the gaming cloud service that NVIDIA announced at CES earlier this month that essentially turns any PC or Mac into a high-powered gaming computer.

“You can use as much or little of the services as you want,” Muyco noted.

The CEO also said that StratusCore wants to take advantage of all the metadata it collects on different customers and projects to help optimize its platform. She envisions creating a marketplace almost like “an Expedia for digital production” that helps artists and studios figure out how to most efficiently produce content.

“Overall it’s about getting people started with digital content creation and production with a low cost of entry,” Muyco said.

The company is not revealing its angel investors or total funding, but it has “raised several million to date” and is exploring an official investment round during 2017. Public SEC filings show more than $3.5 million raised since 2013. StratusCore employs 20 people and is hiring for several positions at its offices in Seattle and Vancouver.