A club at the University of Washington is ready to help launch the next big thing.

Startup UW is a student-run entrepreneurship group that provides a support network and resources for innovative students. The club’s mission is to assist students — most of whom are undergraduates — turn their ideas for new products and businesses into a reality.

On Friday, Startup UW for the first time hosted 15 entrepreneurial teams from across the West Coast in a collegiate pitch contest called TigerLaunch. Judges for the regional competition selected five winners who will go on to a national contest being held at Princeton University in April. 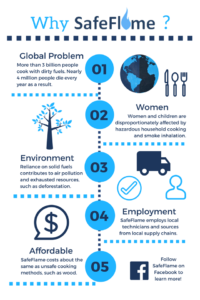 Five of the teams presenting on Friday were from the UW, including one of the winners, SafeFlame, which is working on a technology that turns organic waste into clean-burning cooking fuel.

“Entrepreneurship is alive and well at the UW,” said Matt Koenig, president of Startup UW, and a junior studying finance.  “We have kids coming from every department to do this.”

Startup UW was founded about five years ago and has 80 members. The club is affiliated with the university’s Foster School of Business and its Buerk Center for Entrepreneurship. About 60 percent of the members are from STEM programs, 30 percent from business and the other 10 percent from a variety of majors including communications, public health and design.

Michael Petrochuk, a UW senior in the computer sciences program, joined Startup UW as a freshman and was part of the TigerLaunch competition.

Startup UW taught him “everything I know about entrepreneurship,” Petrochuk said. His venture is called Wardrobe.tips, an online service that advises male shoppers trying to build a well-chosen professional wardrobe.

“It’s so critical to dress well because it affects how people perceive you and your self-confidence,” Petrochuk said.

In addition to SafeFlame, the other winners Friday were Pyur Solutions, a non-toxic pesticide for eliminating fleas, ants, cockroaches and other insect pests; Mecanodontics, an alternative approach to orthodontic braces; Frenzy, a fashion venture; and ConserWater, an app that uses NASA satellite data and weather data to help farmers internationally figure out how much to irrigate their crops.

Other competitors included Trusted H2O, a team from the UW that is researching reverse osmosis technology to provide clean drinking water in developing countries; Bulletin Flights, which promotes itself as “the world’s foremost private aviation networking service”; and Sypht, a team from the University of Oregon, which is working on an app that can quickly scan terms of service and user agreements in search of red flags.

Many of the teams had already successfully participated in other pitch events and hackathons, providing some initial resources that helped them get started. Some found support from university programs. UW students have access to UW CoMotion, which has 3D printers and other resources, as well as a business plan practicum offered through the Buerk Center.

The resources are out there, Koenig said, “you have to be scrappy and find a lot of this on your own.”

Aadith Moorthy is a student from Caltech and the founder of ConserWater. If he wins in the finals, he already has plans for the prize money.

ConserWater is still early stage, Moorthy said. “Once we get funding, we plan to increase our marketing operations. Penetration is the hardest for individual, small farmers.”

The teams going to the finals in April will compete for $30,000 in prize money, as well as the opportunity to meet with national venture capital firms.

The student entrepreneurs, said Koenig, “are solving some crazy problems for the world.”

TigerLaunch operates separately from the University of Washington Business Plan Competition, which has awarded $1.2 million in prize money to 139 student companies in the past 18 years. Team registration for that competition is open from March 13 to April 3.