When Textio arrived on the scene a couple years ago, it addressed two big pain points for the tech industry. “How can we recruit the best talent” and “how can we create a more diverse workforce?”

The Seattle startup aims to answer those questions using artificial intelligence to determine how the language in job postings will perform with certain demographics. The word “oversee,” for example, tends to attract more male applicants while “collaborate” is more appealing to women. Formal words like “the candidate” instead of “you” are a turn-off to both.

More than 7,000 companies are using Textio’s tools to improve the performance of job listings and attract underrepresented groups. That adds up to a lot of data — data Textio is now making public.

The Textio Index, a database of job listing analysis for nearly 60,000 companies, will be available to the public starting Wednesday. The index combines information provided by Textio customers and data from Textio’s analysis of publicly available job listings. Each company is ranked based on its Textio score, a number determined by the performance and gender neutrality of language in job listings.

Why is this ranking useful? It helps recruiters get a better sense of where their company stands.

“The most common use case is when a talent manager or hiring manager wants to understand their competitive positioning and overall post performance,” said CEO Kieran Snyder. “Now instead of asking us, they can look it up for themselves.” 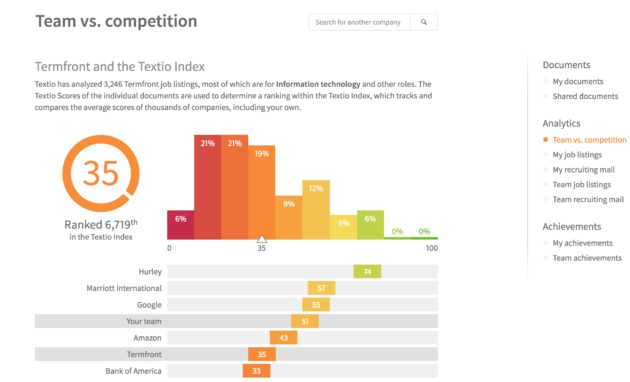 The company is also publishing the Textio 50, ranking large companies based on their Textio Score. Companies represented in the Textio 50 have more than 500 public job listings.

Three Pacific Northwest companies made the cut — REI, Weyerhaeuser, and Nike. Of the biggest tech companies in the country, only Google is included. Microsoft is ranked 6,178th in the index and Amazon is 4,394th.

“Lots has been written about large tech companies and their success or failure in moving their diversity numbers,” said Synder. “It’s of note that among the canonical large tech companies who have made inclusive hiring commitments, only Google is on the list – and if you look up companies like Microsoft and Amazon, you may begin to get a sense of why they’re struggling.”