Fewer companies reaching a $1B valuation than in years past – GeekWire

There are more unicorns in the startup world than ever before, but fewer are being birthed compared to years past. 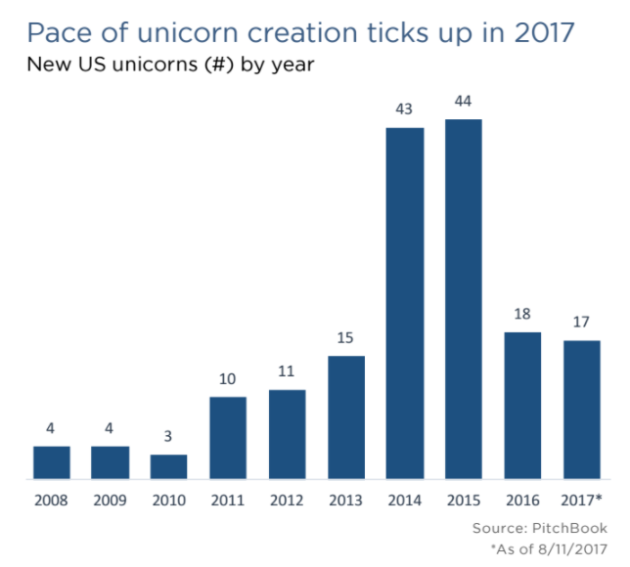 PitchBook released its 2017 Unicorn Report this week and the latest data shows 128 total U.S.-based companies holding a valuation of $1 billion or more at some point in 2017.

That’s an all-time high, and up from 121 last year, though the creation of new unicorns has slowed compared to the massive uptick in 2014 and 2015. During those two years, 87 companies became unicorns. Compare that to just 18 new companies receiving a $1 billion valuation in 2016, and 17 thus far in 2017.

“Though it is the highest aggregate count of unicorns we have tracked, the pace at which companies are garnering such a valuation has admittedly slowed from that of several years ago,” PitchBook noted in its report.

Though VC firms are raising a ton of cash for their funds, “they have remained diligent and rational in order to stay away from over-extending offers to reach an valuation,” PitchBook noted in its report.

Investors with the most unicorns in their portfolio include Fidelity Investments (34); Sequoia Capital (30); and Andreessen Horowitz (30).

Eight of the 128 companies holding unicorn status have exited in 2017 (mostly through IPOs), which is in line with years past, though PitchBook noted that “most of the exits completed this year haven’t been what many see as major successes.”

“The problem with these isn’t that investors were left without a return, as many of them likely received a hefty payout despite the valuation missteps, but that the valued assumed to have been created wasn’t near able to hold its water when outside investors took a look inside the company,” the report noted.

The highest-valued private company is Uber, at $68 billion.

Meanwhile in the Seattle region, there were no unicorns created in 2017, according to a PitchBook spokesperson. Companies with $1 billion valuations or more continue to remain elusive in the area, though OfferUp reached unicorn status last year and Smartsheet is nearing that valuation.