Venture capitalists poured $84 billion into startups in 2017, a massive tally not seen since the dot-com boom – GeekWire

According to a new report issued today by PitchBook and the National Venture Capital Association, the $84 billion in fresh investment was the most since the dot-com boom era of the late 90s. 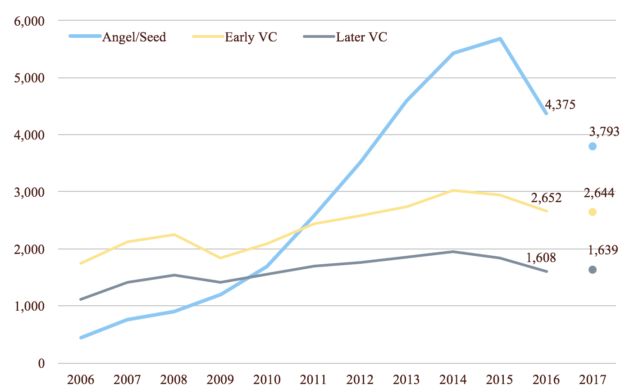 Interestingly, even as VC dollar amounts skyrocketed to record levels, the number of deals fell to the lowest levels since 2012.

That signals a new reality in the venture capital world where cash-loving “unicorn” startups — large privately-held companies such as WeWork Lyft, Airbnb, Houzz and others with valuations over $1 billion — continue to raise big rounds of capital in the private markets.

In fact, PitchBook found that 23 percent of all dollars in 2017 went to so-called “unicorn” companies, while they represented just 0.9 percent of the entire deal flow.

“Exciting later-stage companies with strong consumer traction are commanding large rounds of financing,” said PitchBook CEO John Gabbert in a press release. “Meanwhile, there are game-changing core verticals like VR and AR, IoT, AI and Fintech generating massive investments; there will be winners and losers amongst these VC-backed companies but the technologies are here to stay and will truly change the game for companies and consumers.”

In Seattle, investments and deals actually increased. The metro region — home to tech giants such as Microsoft, Amazon, Expedia and T-Mobile — saw venture capital investing increase to $1.7 billion as companies such as Rover, Smartsheet, Just Therapeutics and Convoy raised big rounds. That was up from $1.5 billion in 2016. The number of deals in Seattle increased to 297 in 2017, up from 267 in the year prior.

The San Francisco Bay Area (including San Francisco proper and Silicon Valley) remains at the top of the heap, bringing in over $33 billion in venture capital in 2017. Deal counts dropped in both the San Francisco and San Jose metro areas.

Pittsburgh, where GeekWire is setting up a temporary secondary headquarters for the month of February, saw its investment levels fall slightly in 2017 to $310 million across 71 deals. That was just behind Portland, which saw an uptick in investment to $317 million.

The report also detailed the environment for venture-backed exits — including initial public offerings and acquisitions. It tracked 769 exits in 2017, the lowest amount since 2011 even though the number of IPOs increased by 41 percent over 2016.