AxonVR just landed more funding and a new patent for its haptic technology that allows users to move through virtual environments and feel the size, shape, weight, texture, and temperature of virtual objects.

The Seattle startup has reeled in an additional $2 million from existing investors, which follows a $5.8 million round AxonVR raised this past December. Total funding is now $9 million.

The company was also recently issued a 130-page patent for key haptic technology it has developed. This is the first patent issuance within AxonVR’s larger portfolio of pending applications.

“This patent is a product of years of cutting-edge research and development in haptic technology,” AxonVR CEO Jake Rubin said in a statement. “It provides comprehensive protection for the novel microfluidic technology at the heart of AxonVR’s HaptX Platform.”

The HaptX platform includes “HaptX Skin,” a haptic smart textile; “HaptX Skeleton,” a lightweight exoskeleton that applies physical forces to your body; and “HaptX SDK,” which allows developers to build touch-enabled experiences into their own applications.

AxonVR envisions “a world in which virtual experiences are indistinguishable from real life.” 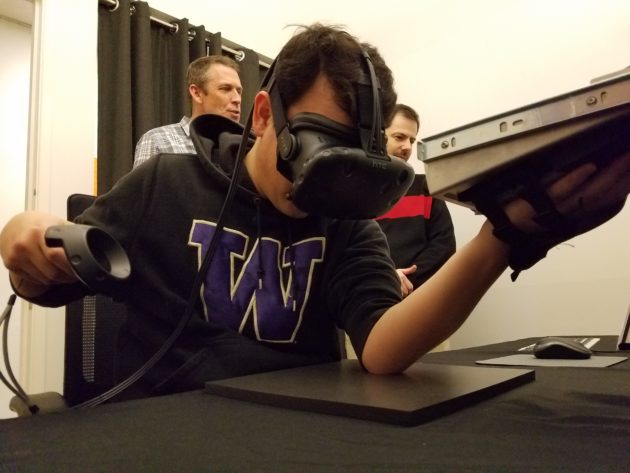 I had a chance to demo AxonVR’s prototype in Seattle in December. While donning a HTC Vive headset with an accompanying controller, I stuck my hand inside a machine and felt a thin, haptic textile made up of microfluidic actuators that applied varying pressures and temperatures to my palm.

Using the controller, I could pick up virtual items like a ketchup bottle and move them across my virtual hand. A small deer rested on my hand and then stood up, as I felt its hooves tap around my palm. Then there was the creepy spider that made me wince as it tiptoed across my skin.

AxonVR is focusing on three potential use case categories: entertainment, design and manufacturing, and training.

The company employs 26 people spread across offices in Seattle and San Luis Obispo, Calif. It is one of many new up-and-coming virtual reality startups in the Seattle area. Others include Envelop VR, Pluto VR, Pixvana, VRStudios, VREAL, Endeavor One, Nullspace VR, and several others. Those are in addition to larger companies like Microsoft, Valve, HTC, and Oculus that also are developing virtual and augmented reality technologies in the region.