In business, some deals go well and others go badly. But that’s never the whole story.

Microsoft bought Seattle-based advertising technology firm aQuantive for $6.3 billion in 2007 in what would later be seen as an epic blunder. Microsoft was looking for an edge against Google in the online advertising market, and, well, you can go Google how that turned out.

GEEKWIRE 200: The top privately held tech companies in Seattle and the Pacific NW

At the time, it was Microsoft’s largest acquisition ever — a title later claimed by the $8.5 billion Skype deal and then LinkedIn at $26 billion. After absorbing aQuantive, Microsoft moved on to another strategic challenge, spending heavily in an effort to make Bing a viable competitor to Google’s search engine.

Five years after buying aQuantive, Microsoft wrote down the acquisition as a loss, spurring CNNMoney to call the deal “Microsoft’s $6 billion whoopsie.” After the write-down, former employees told GeekWire that the teams were unable to overcome a culture clash between the engineering-centric culture of Microsoft with the advertising-centric mindset of aQuantive.

But the story didn’t end there: The former aQuantive executives, entrepreneurs and investors who emerged from ashes of the failed Microsoft acquisition have gone on to play key roles in building the Seattle-area’s tech ecosystem over the following decade. aQuantive’s influence is felt up and down the GeekWire 200, our index of the top privately-held tech startups in the Pacific Northwest.

Take Rover, the rapidly-growing dog-sitting platform that sits at No. 3 on the GeekWire 200. Its CEO, Aaron Easterly, is an aQuantive alum. So is the company’s COO, Brent Turner, and its director of product, Brent Roraback.

Former aQuantive employees have played essentials roles in startups up and down the list, including RealSelf, Flexe, Crowd Cow, PicMonkey and others.

So what about aQuantive prepared so many future startup executives and investors? We caught up with many of them to find out. 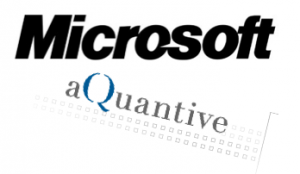 After launching in 1997, the company — then known as Avenue A — went public in February 2000, cashing in at the end of the dot-com boom. “That was a heady time and it was the bubble time,” said Brian McAndrews, who became CEO of aQuantive in 1999.

Then the company went through two rounds of layoffs and lost many clients who failed to ride out the stock market crash. At one point, aQuantive’s valuation was lower than the cash it had in the bank, and its stock was trading so low that it was at risk for being delisted from the Nasdaq, McAndrews recalled.

That period of time helped to establish a culture of humility at the company, said Jeff Lanctot, who led media planning and buying at aQuantive-owned Razorfish and is now CEO at Lakewood, Wash.-based Valor Worldwide, the publisher of OurMilitary.com.

Several employees recalled the “no assholes policy” that was enforced by then-CEO of Razorfish Clark Kokich. “aQuantive was a culture that generally favored people who were both good humans and good at their job,” said Easterly.

That was a heady time and it was the bubble time.

In aQuantive’s corner was a truly groundbreaking piece of technology. The company had figured out how to track the effectiveness of digital advertising in ways that hadn’t been possible before. Today’s online advertising is dominated by cookies and tracking pixels that are modern-day successors to aQuantive’s technology.

“At the time, most people didn’t believe — or even scoffed at the notion — that digital advertising would ever be a thing,” said Karl Siebrecht, who led Atlas, a tech division owned by aQuantive. “The founders and early members of the aQuantive team helped create a vision for the industry, and execute against it to help make it a reality.”

Siebrecht would go on to become co-founder and CEO of on-demand warehouse startup Flexe, which has raised more than $60 million and sits at No. 71 on the GeekWire 200.

In the years following the crash, aQuantive mounted a full recovery. It launched a tech division called Atlas and in 2004 acquired creative web consultancy Razorfish, a deal that effectively doubled the size of the firm. By the time Microsoft bought it, aQuantive had $700 million in annual revenues.

“The crazy growth that happened there definitely helped prepare people for subsequent ventures. However, I think the fact that aQuantive was always a work in progress actually mattered more,” said Easterly. “aQuantive, wasn’t a single thing; it ended up being a holding company for many businesses that each had their own growth cycles. That created a large number of people that got to experience hyper-growth from a leadership perspective.”

During his time at aQuantive, Easterly was on at least five different launch teams for new products or business units.

For Seattle-based investor and advisor Maggie Finch, the work at aQuantive “went hand in hand with coming of age” given that many of the employees were in their 20s and 30s. The company instilled a “nose to the grindstone” attitude toward work that was common at the time but has since fallen out of fashion, she said.

“We really put our back up against it,” added Finch, who was vice president of media.

Despite the hard work, many remember the company as a supportive place. “The culture at aQuantive was magical,” said Andy Liu, a serial entrepreneur and partner at Seattle-based Unlock Venture Capital. “Personally, I felt that people were oriented towards achieving goals and working across teams to help achieve those objectives.”

The acquisition was an ambitious bet on Microsoft’s part. Advertising had never been inside the company’s wheelhouse, but Microsoft was bent on making a run at rival Google.

Like the IPO that snuck in before the dotcom crash, aQuantive’s sale to Microsoft snuck in just ahead of the Great Recession. “If it was nine months later, we would have sold for much, much less,” said Lanctot. “We worked hard, but we appreciated the luck and timing.”

The deal with Microsoft was a windfall that some employees would funnel into other ventures. Finch later used some of the cash to launch King of the Web, an online talent competition for web celebrities. She also became an investor in startups, backing Seattle-based Adxeed and Kari Gran Skincare, and has advised numerous companies including RealSelf, ranked No. 23 on the GeekWire 200.

Liu took the sale of aQuantive as an opportunity to launch his own startup, BuddyTV, and later Unlock Venture Partners, which has invested in more than a dozen startups including Crowd Cow, Concreit, Atsu.io and Downstream — all Seattle companies.

In some ways, aQuantive helped Liu prepare for life as an investor.

“aQuantive was always looking to innovate and create new businesses,” said Liu. “If there was a good idea, management would look to fund it and provide the necessary resources to really go after it.”

But the sale also took its toll as Microsoft’s advertising strategy shifted toward search. That might have made sense given the company’s investments in Bing, but aQuantive’s core focus from the beginning was display advertising.

“It was a definite transition to go from operating a business and being the CEO to being a senior leader in a much, much larger company,” said McAndrews, who stayed on with Microsoft for 18 months following the acquisition. “There were cultural challenges and other things that I just felt it was not a long-term good fit for me, as much as I respect Microsoft.”

Others said they felt that aQuantive’s entrepreneurial culture was lost following the acquisition. The firm was big on holding people accountable and giving individuals as much independence as possible.

In the years that followed, McAndrews went on to contribute to Seattle’s startup community as a managing director at Madrona Venture Group. He has also served on the boards of PicMonkey (ranked No. 76), Amplero, and Placed, which was led by aQuantive alum David Shim and acquired by Snap last year, only to be sold to Foursquare in May. McAndrews’ career has also spread far beyond Seattle — the former Pandora Media CEO is chairman of the board at GrubHub and the presiding director at the New York Times Company. And recently, he became a co-owner of the Seattle Sounders FC.

Other notable aQuantive alumni include former Amazon and Bulletproof exec Anna Collins, Pioneer Square Labs partner Mike Galgon, RealSelf CFO Jim Nida, Townhouse Tech CEO Scott Lipsky, and Foursquare executive Jim Watson. And you might even count Microsoft CEO Satya Nadella on that list — he worked with the group for a while following the acquisition.

This isn’t the first time that an unsuspecting and little-known Seattle area company played a big role in the startup community, as GeekWire reported in 2012 on the entrepreneurial activity sparked by RealNetworks.

To this day, the aQuantive alums continue to get together for periodic reunions. Last fall, members of the media group met up at the Woodinville Cut Shop, which is co-owned by former Avenue A employees, and it sounds like Lanctot has offered up his offices to host the next gathering.

Two companies made moves near the top of the GeekWire 200 this month — Remitly to No. 4 and Convoy to No. 12.

Here were the month’s biggest movers:

The GeekWire 200 — sponsored by CenterCard — is derived from our broader list of more than 1,200 Pacific Northwest tech startups. The list is designed to provide a better understanding of the startup landscape in the Northwest. The rankings are generated from publicly available data, including social media followings, approximate employee counts (via LinkedIn) and inbound web links. As we mentioned, the most important factor is employee growth, since our goal is to track those companies who may be emerging as the next Microsoft, Amazon or Expedia.

To make sure your startup is eligible for inclusion in the GeekWire 200, first make sure it’s included in the broader Startup List. If so, there’s no need to submit it separately for the GeekWire 200. If your Pacific Northwest startup isn’t among the companies on that larger list, you can submit it for inclusion here, and our algorithm will crunch the numbers to see if your company makes next month’s GeekWire 200. (Please, no service providers, marketing agencies, etc.)

Thanks to everyone for checking out this month’s ranking. And, just a reminder, if you value resources like these, be sure to check out our list and map of out-of-town tech companies with Seattle engineering outposts as well as our list of startup incubators, co-working spaces and accelerators in the region, startup fundings, and our GeekWork job board.