Identity is the bedrock of so many internet services, both personal and professional. Secure, easy-to-use identity management systems are in high demand by consumer-facing companies that also need to manage their own employee application logins, and Auth0 is ready to go after more of those organizations with new funding.

The Bellevue-based startup just raised $30 million in a Series C round led by Meritech Capital Partners, with participation from Auth0’s existing investors as well as the venture arms of two Asian telecoms: Japan’s NTT DoCoMo and Australia’s Telstra. Auth0 has now raised $53 million in funding to help develop its system for managing logins to both consumer applications and internal corporate systems.

“The internet is a very dangerous place; our job is making it easier for IT admins to make their apps secure by design,” said Jon Gelsey, CEO of Auth0. 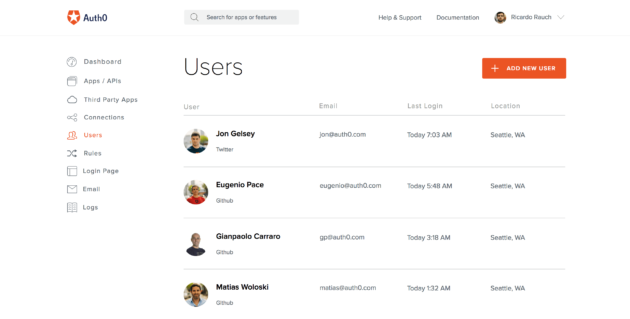 There are a lot of companies that offer help in managing one of the most crucial questions for application developers: are the right people using this app? Okta is perhaps the darling of the space right now, executing its IPO this past April, but Microsoft (where Gelsey once worked) and Ping Identity are also players in this space along with a score of startups like Auth0.

Gelsey acknowledged the competition, but pointed out that one of his company’s biggest competitors are internal IT organizations that think they can build and manage sign-on technology on their own.

More and more modern enterprises are recognizing that every line of code that’s not part of our core product is not an asset.

“More and more modern enterprises are recognizing that every line of code that’s not part of our core product is not an asset. The less code one writes by replacing your code with a call to Auth0, the more secure your application or IoT device is going to be,” he said.

Auth0 has been seeing more success outside the U.S.; more than half its revenue comes from customers in foreign countries, Gelsey said. It counts Australia-based Atlassian among its larger customers, but it also provides its services to prominent U.S. companies like News Corp. and Nvidia.

The company now has 225 employees, and while its headquarters remain in Bellevue, Auth0 is a truly global operation. A “minority” of employees are based in Washington, while the company just opened an office in London and is preparing to open one in Sydney, Australia, joining an existing office in Buenos Aires, Gelsey said.

However, Auth0 will always be a Seattle-area company at heart. It made last year’s Seattle 10, GeekWire’s list of the most promising startups in the area.