Microsoft and Nathan Myhrvold invest in Atlas, a search engine for your digital footprint – GeekWire

Microsoft and Nathan Myhrvold are some of the backers behind a new Seattle startup that wants to create a search engine for your digital life.

Atlas Informatics today pulled back the curtain on its technology and fundraising to date, announcing that Microsoft, Myhrvold — the Intellectual Ventures co-founder and former Microsoft CTO — and Aspect Ventures are among the investors who have put a collective $20.7 million behind the company.

Atlas came out of stealth mode a year ago as the first company spun out of Seattle startup innovation studio Ivy Softworks, revealing a few details about its technology.

Jordan Ritter, the Napster co-founder who launched Ivy Softworks and is CEO of Atlas, describes the company’s product as a “searchable photographic memory for our entire digital life.” The software runs in the background of your computer, using the accessibility features in the operating system to capture an index of semi-structured text. It keeps a encrypted record of everything you are doing across different apps and services, whether it’s email, a web page, a word document, a PowerPoint, a Slack message, etc.

There are already existing services that comb your digital footprint, but they utilize the APIs for each app or program. Ritter said Atlas is “profoundly” different.

“We take a fundamentally different approach — one that no one has ever done before,” he said. “We drop down a layer into the OS.”

Atlas also integrates with Google search and Spotlight on Mac and lets you use those platforms to search across your digital footprint. 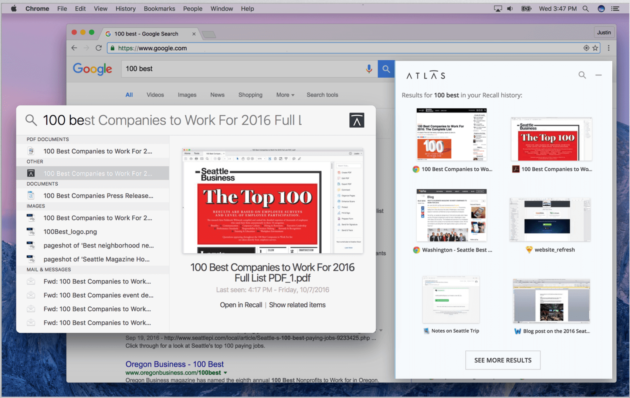 For example, imagine this scenario. You’re an employer getting ready to interview an engineer. There have been emails exchanged, notes taken, calendar items listed. You want to access that person’s resume, but can’t remember his or her name.

Atlas lets you search for “security engineer,” which surfaces the person’s face from a LinkedIn page you were previously looking at. You recognize the person, see the LinkedIn page, and can then easily access the resume and other related documents because you were looking at all of that around the same time. 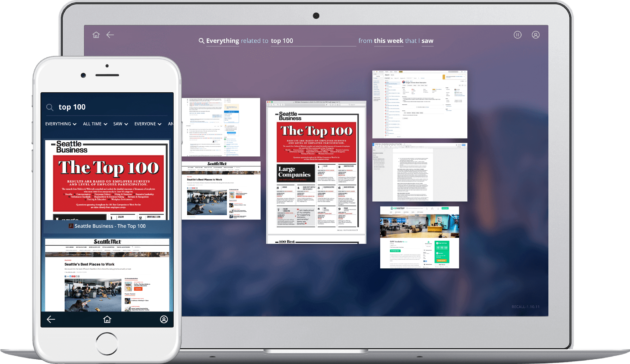 One of the company’s taglines is, “if you’ve seen it, you can search for it.” Travis Murdock, VP of marketing for Atlas, said that “what we’re really building is search that works like your memory.”

“Very often when you remember things, you remember where you were, or who you were with, or who you sent something to,” Murdock explained. “That type of contextual search is very unique to what we’re doing, and it happens because we are remembering these documents at the time when you have them open.”

Ritter called the accompanying smartphone app a “killer use case.”

“You’re about to walk into a meeting and you need to send your colleague a Word document, a Google Doc, and some emails,” he said, offering a hypothetical example. “How are you going to get all that stuff? Which system were you using? Where? When? You don’t remember, but you can load up Recall on your phone, do a quick search, and all your stuff is there. You can click to share and walk away.

Ritter added that the indexing technology is “on the level of sophistication for what it takes to build an anti-virus system.”

Privacy, of course, will certainly be a concern for customers with Atlas, given the access to so much personal and private information. Atlas has a “privacy promise” to all users, guaranteeing that they remain in control and own their data at all times. It uses features like “Pause” to give users a way to block Atlas from remembering what you’re doing for a given time period, or “Block,” which lets you block specific URLs or files or apps that you don’t want Atlas recording.

“All of the digital items remain encrypted both at rest and at motion,” Murdock added. “That means your data is always secure no matter what happens to it.” 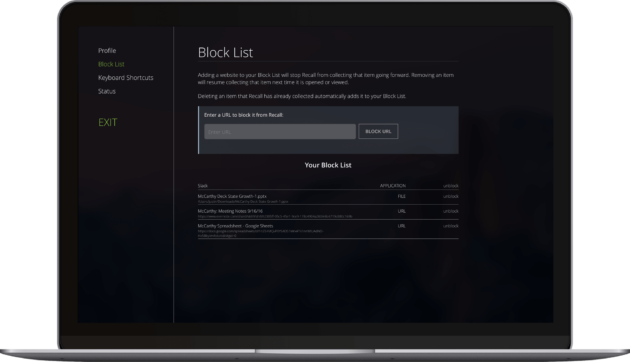 The company has some big-name investors like Myrhvold and Microsoft, which is not investing via its Microsoft Ventures arm but from the company itself, Ritter said.

“I think they see a huge opportunity with an unmet need for the digital chaos problem,” he said of the investors.

There are plans to go beyond what Atlas Recall currently offers. Ritter said the next phase will be about “intelligent suggestion,” with devices and software learning more about users and helping them achieve even more productivity-oriented tasks.

I think they see a huge opportunity with an unmet need for the digital chaos problem.

“That is a huge future and there are so many things you can do around that,” Ritter said. “I think that’s why everybody is really excited.”

When Atlas first spun out of Ivy Softworks, all of the employees from Ivy Softworks shifted to work for Atlas. For now, Ivy Softworks “has been put on pause for now, but the business continues to exist,” Ritter said. There are 34 employees at Atlas.

As Ritter explained to GeekWire in 2014, in his view, it’s simply inefficient to spend time recruiting a whole new set of A-team players or finding new office space every time a new business idea emerges. His goal is to “keep the band together,” even after a group of innovators spends a few years building one product.

“You spent all of this time and energy and effort and money into cohering this amazing group of people … but you end up with this core group and kernel of innovators only to lose them in the third year,” he said last year. “A good idea with a bad team fails 100 percent of the time. A great team with a terrible idea has a chance of a succeeding. It’s really all about the team. When you think about early-stage investment, it is all about wanting that kernel, that group of people, and really honing in on that.”