Tomo launches: A new real estate startup led by former Zillow executives Greg Schwartz and Carey Armstrong officially launched Wednesday in Seattle, Dallas, and Houston. Tomo also announced an additional $30 million as part of a giant $70 million seed round — one of the largest ever for a real estate company. GeekWire initially reported on the company in October.

The tech: Tomo wants to speed up the mortgage approval process and move it entirely online — like a PayPal for the mortgage industry. Its offers both a verified pre-approval, which does not require a “hard credit inquiry” and can be completed in three hours, and an underwritten pre-approval, which takes about a day and includes a “Closing Guarantee.”

Tomo requires a credit score about 660 and a credit account in good standing. It offers 15- and 30-year fixed rate conventional loans starting at $150,000.

The startup offers a price match if homebuyers find better mortgage rates. It also discounts interest rates by 0.125% if customers use a Tomo Brokerage Partner Agent. The company partnered with real estate coach Tom Ferry to build out a network of agents.

Speed matters: The idea is to use data and software to accelerate the purchase process and help get buyers to a stronger position as they compete with other offers in a red-hot real estate market that has sparked intense bidding wars for homes. Tomo says it can cut the average time-to-close by as much as 55%.

Tomo does not offer refinancing services and instead focuses on just approvals. It has dedicated customer service agents for each city. The name “Tomo” comes from the Japanese philosophy of “omotenashi,” which is about providing ultimate hospitality and anticipating the needs of a guest.

Tomo faces competition from traditional mortgage providers and also more similar tech-fueled startups such as Accept, Lower, Maxwell, Lenda, SoFi, and others aiming to digitize real estate processes and give buyers an edge. That group includes companies like Seattle-based Flyhomes, which enables all-cash offers for buyers. 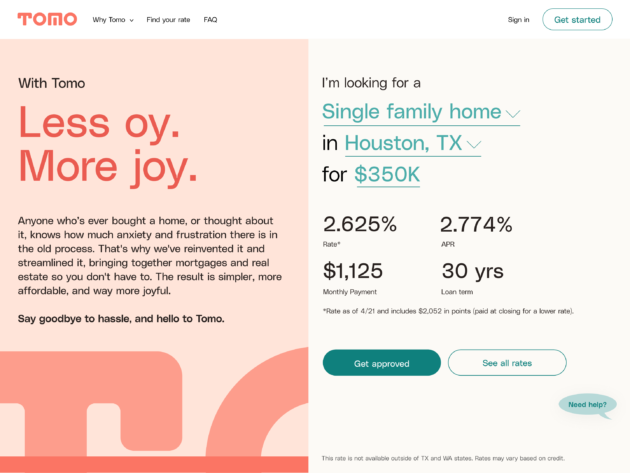 Leadership: Schwartz spent 13 years at Zillow, helping the Seattle company grow into a real estate database behemoth. He held titles including vice president of sales, chief revenue officer, chief business officer, and most recently president of Media & Marketplace when he left in January 2020.

Schwartz, CEO of Tomo, told GeekWire in October that he was proud of what he and his colleagues accomplished at Zillow, but “there was unfinished business for me and my friends in making the real estate transaction fundamentally more comfortable.”

Funding: Tomo said it had raised $30 million in October, and added another $40 million since then. The company added DST Global as an investor. Ribbit Capital led the seed round, which included SVB Capital, Zigg Capital, and NFX, a firm co-founded by Pete Flint, who sold Trulia to Zillow for $2.5 billion in 2015. Former Zillow CEO Spencer Rascoff is also an investor.

Tomo has offices in Seattle, Austin, and Stamford, Conn., where Schwartz is now based. The company employs about 100 people and expects to reach more than 180 employees this year. It plans to launch in additional markets in 2021.